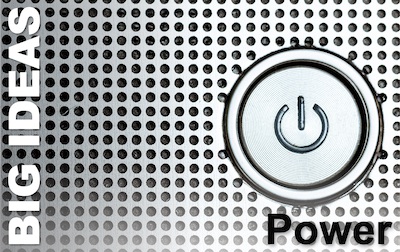 Could there be a Big Idea more important than power? It’s a concept central to both physical and social sciences.

But we shan’t go anywhere near the physics of power, beyond noting that its precise definition is broadly consistent with how we interpret it in the human domain.

Here, we are concerned with management and workplaces. So what does power mean in this context, and how can you acquire it?

Why Does Power Matter?

You’ll find plenty of people who will tell you that ‘power is not important to me’.

My dictionary describes power as ‘the ability to do something’. We all want – no, need – power.

The Need for Power

So, what do people mean when they say they are not interested in power? I think they are referring to how important it is to them.

David McClelland‘s model of motivation is useful here. McClelland set out three motivational needs that drive us at work. These are the needs for:

In this context, McClelland has separated power from achievement. His conception of power as a motivational driver is not about getting things done. Rather, it is about standing out from and above your peers. It grants the ability to control people and decisions, and exert your will over those of others. In our 2012 article, I caricatured it as the ‘evil Bond-villain laugh, while stroking a white cat’.

And, just to be clear, there are plenty of people for whom this type of power is not a driver. Indeed, for most of us, it is anathema.

What then, do we Mean by Power?

In the context of the workplace, two broad interpretations are important. These are, power as the ability of:

The simplest model of organisational power is that of leading US thinker, Amitai Etzioni. He suggested there are three kinds;

But remember, it is the substance and detail of how an organisation behaves that determine which form of power it applies, rather than the form of the organisation:

Even within an organisation, power, like culture, is really in the hands of people. It’s a social thing.

We cover the topic of John French and Bertram Raven’s Social Power Bases thoroughly in print (The Management Models Pocketbook) – alongside an introduction to Etzioni’s ideas. And there is also an article about Power Bases on this website. So I shan’t rehearse the 5, 7, or 8 Power Bases that French and Raven described. But do take a look at our article.

There are two types of individual power

The power you or I have within our organisations is a combination of two forms of power:

So, let’s look at each of them…

When organisations or society hand over authority to us, this is Power Granted. French and Raven describe this as ‘Legitimate’ or ‘Hierarchical’ power. In society, when we elect or appoint someone to a role, we are granting them power.

We can earn power through hard work or easy work – good work or bad. This represents French and Raven’s forms of personal power:

But let’s focus on the way to earn lasting power that meets the highest standards of integrity.

How to Earn Power

Way to earn lasting power – that will grow with you and last through your career is simple. And Heraclitus nailed it in the 6/5th century BCE:

The dull but true source of power is your character, your:

These things make you influential. Which brings us back full circle. If I can influence you without exerting any authority over you, then you will do as I wish without feeling obliged to. This is like Etzioni’s normative power in organisations. But truly, it also becomes power granted.

What about ‘Power Seized’?

The ‘strong man’ model of power sees the power player (more often than not, an actual man) seizing power. But this is a matter of perspective. At the point of transfer, the prior holders of power (willingly or not) granted power. And, in the view of the new power-holder, I am fairly sure they believe they earned it. And, arguably, they did – even if the work was unsavoury.

Three forms of Social Power Bases that French and Raven document can fall into the category of Power Seized:

And we can easily see that organisations and people can grant these levers over us willingly or unwillingly. If I give in to coercion or bribery, is that you taking power over me, or me ceding that power to you?

What is Your experience of Power?