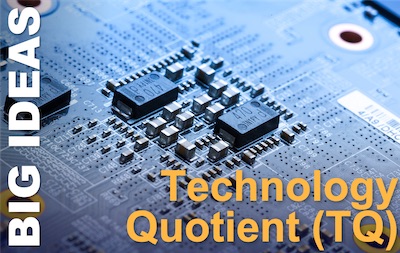 It is a cliché to assert that technology is ubiquitous in the workplace. Yesterday’s innovations will eventually become today’s commonplace tools. So, we all live with and easily manage technology our great grandparents would have found strange and maybe alarming. But some of us are comfortable with the very latest creations – those that will only be deeply familiar to the coming generations. And we might describe these people as having a high TQ: a high Technology Quotient.

The Big Idea, ‘Technology Quotient’ takes its inspiration from IQ, Intelligence Quotient. But what does it measure and is it a useful concept?

Why the Term ‘Technology Quotient’?

The idea of Intelligence Quotient, or IQ, has a long and somewhat fractious history. And the relative merits and risks of measuring intelligence take us way beyond my pay grade. Suffice to say that, as a statistical measure of human capability, IQ has inevitably been much abused.

But the long history and academic veneer of the Intelligence Quotient has lent it a certain cachet. The idea that we can measure an aspect of people is appealing to many people.

Intelligence Quotient as a Metaphor

And IQ provides a handy metaphor for a single measure of a complex cluster of related characteristics.

The rapid growth of the Big Idea of Emotional Intelligence in the 1990s led to the coinage: EQ: Emotional Quotient. Following that, we have seen a slew of writers coining similar terms:

Hey… Why not go full Howard Gardner and have a quotient for all of his multiple intelligences?

The Inevitability of Technology Quotient

So, perhaps it was inevitable. Technology and our use of it is such an important aspect of modern life. And our ability to use it well – or not – is often a differentiating factor in recruitment and promotion at the workplace. It seems no surprise (with the benefit of 20/20 hindsight) that someone grabbed the analogy and coined the term Technology Quotient.

And so they did…

There is a webpage that dates back to 2007. It refers to a website built by PayPal. This allowed users to Test their TQ. Sadly the site is no longer available, but it tells us two things:

A Note about Tracing the Origin of TQ

Normally, I’d try to trace the origin of a term like TQ is using Google’s ngram tool.

However, two things get in the way:

The first solid use I’ve been able to find is in a Psychology Today article, by John Nosta.

What is Technology Quotient?

In his article, John Nosta defines Technology Quotient as:

A technology quotient representing a person’s ability to adapt to and integrate technology as compared to the statistical norm or average for their age, taken as 100.

However, I prefer the definition (from a few months later) in a paper that covers some form of seminar or workshop by John Burton. This defines TQ as:

…our ability to assimilate or adapt to technology changes by developing and employing strategies to successfully include technology in our work and life. A high TQ includes the right attitude, capabilities and decision- making strategies to fully leverage technology. A person with a high TQ:

I am constantly impressed by the quality of research and analysis that the consulting firm McKinsey publishes. Do take a look at their Featured Insights from time to time.

In 2015, they carried out research into practices related to digital strategy, capabilities, and culture. The resulting report, ‘Raising Your Digital Quotient’ is wide-ranging, subtle, and thoughtful.

As always, their target audience is the C-Suite of major corporates.  McKinsey’s Digital Quotient initiative is about company-wide culture and strategy. But what I like about the term is its focus on digital technology. Here is how McKinsey defines their own term:

Digital Quotient® (DQ) measures an organization’s performance across four key dimensions of digital maturity. Executives use the results to compare their performance against hundreds of organizations and digital leaders, identify their digital strengths and weaknesses across business units, and prioritize the initiatives of greatest potential impact.

The four dimensions McKinsey is referring to here, are:

In it, PMI defines Technology Quotient as:

…a person’s ability to adapt, manage and integrate technology based on the needs of the organization or project at hand.

What I value most in their report is PMI’s articulation of what it means to have a high TQ. They don’t choose the ‘obvious’ things like:

Rather, we see what seems to me to be subtle and mature thinking.

I have written a comprehensive review and assessment of this report – along with my own thoughts about the PMTQ concept.

In 1996, John Perry Barlow coined the term ‘Digital Native’, as part of a Declaration of the Independence of Cyberspace. The term describes someone who grew up in the digital age (‘when did it start?’ I wonder). It contrasts them with ‘Digital Immigrants‘, who moved into the digital world as adults.

In the 1950s, executive recruitment in many countries sought out ‘high-IQ’ individuals who were intelligent. Employers saw this kind of ‘smart’ as an indicator of value and effectiveness.

In the 1990s and early 2000s, there was a pivot towards EQ as the indicator of future managerial and professional success. And we are still in that world.

But, I speculate, we may see concerted attempts to quantify and test Technology Quotient. Will today’s young people find themselves taking TQ tests as part of their recruitment process? I would not rule it out.

What is Your experience of Technology Quotient?