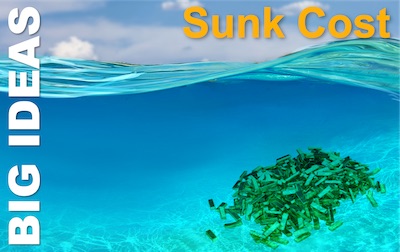 ‘You’ve bought it now. The money’s gone.’ That snarky comment made by thousands of parents (mine included) to their reckless child encapsulates the meaning of sunk cost. Once you met the cost, it’s gone: sunk. You’ve sunk it into the investment for good or for ill.

This, then, could be the shortest Big Ideas article yet. Sunk Cost is a familiar and easy concept.

Why is Sunk Cost such a Big Idea?

Sunk Cost is a Big Idea because, despite understanding it intellectually, too often we throw that comprehension out when making decisions about the future. And this is the cognitive bias known as the ‘Sunk Cost Bias’. The thinking is wrong, so we also call it the ‘Sunk Cost Fallacy’.

So the real question ought to be: ‘why does the sunk cost fallacy get us so often?’

What is Sunk Cost – properly?

Why do we assume that a story told about parents and children isn’t a proper definition? I guess it’s a sort of framing bias – the frame affects our perception of reality. I’ll call it the simplicity bias. Because we think that simple cannot be as ‘correct’ as a more sophisticated articulation. Yet, surely, it can.

But, if you want a more grown-up, intellectual sounding definition than ‘You’ve bought it now. The money’s gone.’ here it is…

Sunk Cost is the investment (of money, resources, or time) that you have already made and can no longer recover.
In the sense that you cannot recover them, the costs are ‘sunk’.

We can compare sunk cost with a future cost. A future cost is one we have not yet committed.

This brings us to the Sunk Cost Fallacy.

What is the Sunk Cost Fallacy?

The Sunk Cost Trap, Bias, or Fallacy is the mistake we make, when we use arguments about investments we have already made to justify a decision about future actions or investments.

Beacuse we can’t change the past, this is careless thinking. Let’s take the example to clarify.

Example of the Sunk Cost Fallacy

Let’s say you have a new prototype product and you invested $1 million dollars.

Your prototype very nearly works. It will only cost $50 for the new component that will get it fully working

But now you have learned that your competitor has already brought to market a far superior product, which it sells at a substantially lower price point. That product uses a more advanced technology that will make future developments easier.

And it gets worse. New market intelligence tells you that other competitors are advertising competing products that will raise the bar still further. Your prototype is already out of date and the marketing and sales teams advise that we would not recover our promotion costs with sales revenue.

Should you invest $50 dollars to bring your $1 million product into service?

It’s just $50… one two-hundredth of a percent of our costs! Without spending that $50, your prototype is a failure and it’s $1 million down the drain.

The answer is no.

The correct way to evaluate the future cost of $50 is this: will that $50 investment bring a sufficient reward?

Since the answer is no, that $50 would be ‘good money after bad’. You are better to write-off the $1 million investment and deploy the $50 on something of value.

So, there’s Your Definition

The sunk cost fallacy is preparedness to throw away good money after bad.

And if you think that definition is too simple… tough!

Is the Sunk Cost Fallacy Really a Problem?

On the face of it, who could really get caught out by this kind of faulty thinking? Well, the answer is… you. And me… and, frankly, pretty much everyone.

It isn’t so much the cash investment that causes the bias. Rather, it is the emotional, psychological, reputational and, frankly, political investment. Let’s take some common examples.

Does any of this sound familiar?

What is Your Experience of Sunk Cost Thinking?