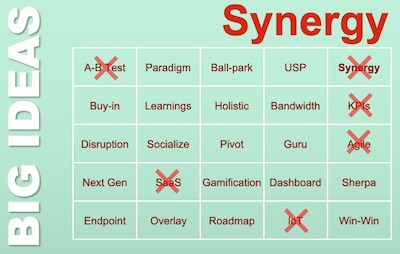 Synergy is a Big Idea that has been around… forever. Or as near as makes no difference on a human scale.

In the animal world, we call it mutualism, but you know how fundamental an idea is, when your mum expressed it to you in plain language when you were just a small child. ‘The whole is greater than the sum of the parts’. That’s what synergy means. So, why is it such a widely used word in business – so much so that it has pride of place on many-a buzzword bingo card?

And there’s another question we need to get to grips with… How real are the synergy benefits that leaders so often advocate for? The fact is that the whole being greater than the sum of its parts is a nice idea – but logically, it would seem to be flawed. So, when does the concept apply?

Synergy is working together so that the result is greater than could be achieved from summing the individual efforts. We get the word from the, ahem, synergy of two ancient Greek words:

In fact, there is an older form, Synergism. We use it as an alternative word in business. But, in Christian theology, it specifically refers to the coming together of the holy spirit and human will, to bring about salvation and spiritual regeneration. So, let’s leave that version to one side!

And from synergy, we also get synergetics. This means creative problem solving by bringing people together.

Synergy Crops up a Lot in Corporate Restructuring

In the world of corporate investment, synergy is the concept that the combined value and performance of two companies will exceed that of the sum of the separate individual parts. You will most often hear of synergy savings as a driver for mergers and acquisitions (M&A).

For example, by bringing together two back-office functions, advocates will assert, we can reduce the overall headcount and licensing costs, yet deliver enhanced services.

That makes sense; why doesn’t it work?

But, consider if two people doing two jobs come together. And consider that it only takes one and a half people to do the new combined job. It’s rarely easy to redeploy (or make redundant) the half a person left over.

So you have two alternatives to this:

It’s actually more like 1&1 = 3. Where I have used the & symbol to stand for some combination. Often this is far more complex than just adding.

A good example comes from the science of chemistry.

Add salt and water and what do you get? Salt water. It’s a simple combination of the two that is precisely the sum of the parts.

Salt is, chemically, Sodium Chloride (NaCl). Add Sodium and Chlorine together (and stand well back – don’t try this at home – both are fiercely dangerous elements). But what emerges is a safe (and biologically essential) compound. It is very different to the sum of its parts.

What about a human example of synergy?

Let’s say my cat is stuck up a tree.

So, I stand at the bottom and call it. Nothing happens. It looks at me bemused – if it wanted to come down, it would.

Now my daughter stands next to me. She calls it too. And guess what. The cat now has twice the entertainment. No more, no less. This isn’t synergy.

But if, instead of standing next to me, my daughter stands on my shoulders, then we can do something neither of us could do alone. We can reach the cat and bring it down. That’s synergy.

The natural world has known synergy since the dawning of life. Indeed, it’s a strong theory that the very cells that make up our bodies and those of every multi-cellular plant, animal, and fungus – not to mention a good portion of single-celled organisms – are the result of the synergy between two organisms.

In biology, Mutualism refers to interactions between members of the same or different species, where both gain a benefit.

By the way, don’t confuse it with the broader concept of symbiosis – a close and persistent association between two organisms of different species. These can be positive for both (in the form of mutualism), or for one only. Commensalism refers to the circumstance of one organism benefitting and the other gaining neither benefit nor harm. Almost predictably, there are three kinds of symbiosis, where the dependence benefits one party at the expense of another: competition, predation, and parasitism. It seems Tennyson had the right of it:

Nature, red in tooth and claw

What is Your experience of Synergy?

Have you seen merger or acquisition synergies come to realisation? Or have you seen the promise of great benefits come to naught? Do tell us. We’d love to hear your experiences, ideas, and questions. Please leave them in the comments below.