Have you ever wondered why people suddenly lose motivation?

Victor Vroom gives us a simple way to understand not what motivates people, but when they are and are not going to be motivated by something.

It is simple really…

The only problem is the obscure words Vroom chose for some of his model. But let’s not let that get in the way.

I am going to ask you to do something and promise you a reward if you do it. Will you be motivated?

Here is what goes on in your mind…

First, do you believe that if you put in your best effort, then you will get the result I am looking for? If you do, then that is good, but if you think you don’t have the skills or the resources, or if you think the task is too hard, or my standards are too high, or I am deliberately setting you up to fail, then you won’t be motivated – and that is that.

This is what Vroom called ‘Expectancy’.
Let’s say you are satisfied…

The next question you will be asking yourself is whether you believe that if you do as I ask, I will actually deliver the reward I promised. A lot of organisations have a record of letting people down here; promising promotions and pay awards that never come. Can they be surprised if people get demotivated?

This is what Vroom called ‘Instrumentality’.
Let’s say you do believe me…

Finally, you will consider whether the promised reward is worth the effort. This is a simple cost-benefit assessment: a chocolate bar for a day’s work – No; a meal out for two at a posh restaurant for an hour’s work – Yes.

This is what Vroom called ‘Valence.
Let’s say you want the reward…

Then you will be motivated to undertake the task.

But… if any link in the chain is broken: no motivation.

I told you it was simple. Here is an illustration from The Management Models Pocketbook, and you can read the section on Vroom in the free extract from that book too. 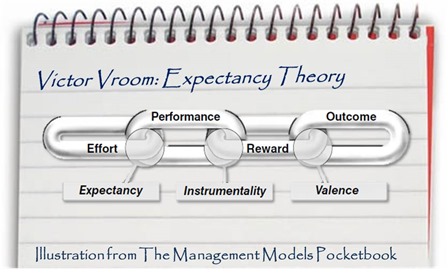