Abraham Maslow never set out to be a management thinker: his attention was on people in the round. It was only his desire to test out his ideas – and those of colleague Douglas McGregor – that led him to be one of the best known names among managers. His model of motivation is almost certainly the most widely known in English speaking organisations. Does it deserve to be? 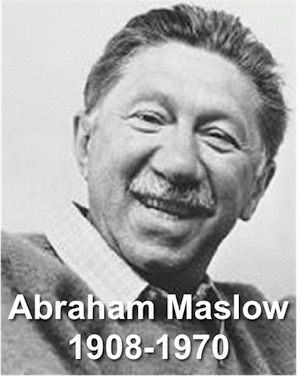 Abraham Maslow was born in 1908 to Jewish emigré parents, who had come to New York to escape Tsarist pogroms in Russia. There, Maslow grew up amidst antisemitism.

He took his undergraduate degree at City University of New York and then gained his MA and PhD in psychology at the University of Wisconsin in 1934. His thesis considered dominance and sexuality in Monkeys, which later led noted sexologist Alfred Kinsey to seek out his assistance in the 1940s. Maslow, however, rejected Kinsey, challenging the rigour of his research and later publishing evidence of bias in Kinsey’s sample selection (of young women for his study).

Maslow spend the late 1930s and the 1940s teaching and researching at Brooklyn College, where he published his most notable work on The Hierarchy of Needs in 1943 (A Theory of Human Motivation, Psychological Review, 50, pp370-396). This was later fully documented in his most important book, Motivation and Personality.

The core of Maslow’s work as a psychologist was his move away from studying the psychology of people with problems, towards people who are successful. He used the term ‘positive psychology’ and was almost certainly the first to do so. It is now widely used, since its establishment as a (now very vibrant) field of research by Martin Seligman.

However, the movement he was instrumental in had the name of humanistic psychology and it is one that last week’s Management Thinker, Mary Parker Follett would have embraced.

The Hierarchy of Needs

His major contribution was a model that was designed to explain human behaviour and has subsequently come to be used as a theory of workplace motivation. He built a needs theory of human behaviour by first grouping human needs into classes, and then arranging these classes into a hierarchy. He argued that the prospect of satisfying an unmet need leads to motivation to act or choose.

Often shown as a pyramid, with basal (or ‘deficiency’) needs at the bottom and higher (or ‘growth’) needs at the top, the sequence means that our first instinct is to focus on the lowest level of unmet need.

Physiological Needs
include warmth, food, sex, sleep and shelter – anything necessary to survival.

Safety and Security Needs
can now be thought of as job, wage or other economic security.

Love and Belonging Needs
are for social acceptance and the development of trusting relationships.

Esteem Needs
are firstly for power, status and prestige and then, for a self-belief that our place is merited.

Self Actualisation
was what Maslow was interested in: maximising our potential, living life to the full and contributing to our society.

In more modern needs theories of motivation, like Self Determination Theory of Ryan and Deci (popularised by Daniel Pink), belonging, esteem and self actualisation are still seen as powerful workplace motivators in the forms of relatedness (love and belonging), competence (esteem), and autonomy (actualisation).

There are two critiques that are commonly levelled at the Hierarchy of Needs – one valid, one not.

It is often argued that the hierarchy presents a rigid sequence and that we continually want more, so do not fully escape the lowest levels, whilst some artist, say, will self-actualise away in lonely poverty in a cold garrett ignoring the basement motivators. In fact, Maslow himself said that the hierarchy is neither universal, nor a rigid sequence. The price his legacy pays for fame, is that most people learn the model from a few paragraphs in a text book or fifteen minutes in a management training session – and not from Maslow’s own writing. (Up goes my hand too!)

The more valid critique is the shallow research base for the model, and the reliance Maslow placed on anecdote, interview and subjective interpretation. However, we must understand his motivation: which was to create a springboard for studying what really interested him – Self Actualisation.

In fact, he did spend time in industry, studying motivation, but it was Douglas McGregor’s Theory Y that he was testing – and he found it wanting. Much as he supported it, he found it too simplistic in the real world, where people need a dose of Theory X predictability to feel fully secure.

Above and Below the Pyramid

Interesting to me is Maslow’s argument that we cannot satisfy our needs unless we have sufficient freedoms. As a humanist, he argued strongly for basic human freedoms such as expression and speech, the ability to defend ourselves, and for a society that prioritises justice.

Above the pyramid, he argued we would find needs higher than self-actualisation in the way he described it. These may be some form of aesthetic, spiritual or transcendent needs. This is an idea that Clare Graves developed into Spiral Dynamics, although the merits of that model need careful assessment.

For may years, knowing he came from Russia, I pronounced his name Mazlov. My research for this article shows that I was wrong. The name is common among Polish and Western Ukrainian Jewish families, where the -ow ending is pronounced with the soft w sound. A research student of his from the early 1940s records on a Wikipedia discussion page that Maslow pronounced his own name as Mah-zlow.