Susan Cain took the world by [quiet] storm at the start of 2012, with the publication of her her book, Quiet: The power of introverts in a world that can’t stop talking. It won many plaudits and quickly became (and remains in autumn 2014) an international best-seller. In it are some gems that can transform the world of managerial and professional work radically. 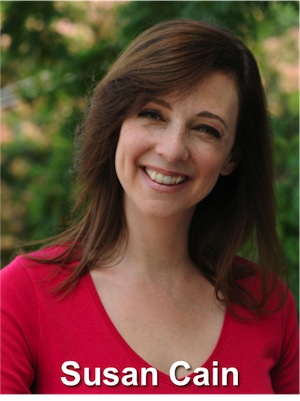 Susan Cain (formerly Devenyi) was born in New York, in 1968 and grew up loving reading.  So it seems little surprise that she took a degree in English at Princeton. She followed this with Harvard Law School, where she graduated with a doctoral degree in 1993. This led her to practise corporate law on Wall Street in the firm of Cleary, Gottlieb, Steen & Hamilton, representing blue chip corporations.

She put her commercial experience to use in co-founding the Downing Street Group, a strategic research and consulting firm, and founding The Negotiation Company. In the latter, she was making good use not only of her experience as a practising attorney, but also of having studied negotiation intensively while at Harvard Law School, with Roger Fisher, author of the seminal book on the subject, Getting to Yes.

But she wanted (needed?) a quieter life, so took seven years to write and research her best-selling book. Now, ironically, she has become a major public figure, much in demand as a speaker (her TED talk, which you can watch below, is one of their most watched ever with approaching 10 million views).

More recently, she has also established ‘The Quiet Revolution’. In her 2014 TED talk (not yet available online) she announced three objectives:

Introverts are not necessarily shy. Cain describes shyness as: ‘the fear of social disapproval or humiliation’. Introversion, on the other hand, is a preference for quiet, low stimulation environments. Introverts like to have time to themselves, to be with their thoughts.

Compare introverts with the opposite end of the scale: extroverts. Extroverts crave stimulation; especially from social situations. Note, however, that neither you nor I are either an introvert or an extrovert. We all lie somewhere on the scale from a arbitrary archetype of introversion to an equivalent extreme of extroversion. And, in the middle, lie ambiverts. These are people who are equally comfortable in stimulating social environments and in quiet private spaces.

Here is Cain’s description of the two types:

‘Introverts are drawn to the inner world of thought and feeling, said Jung, extroverts to the external life of people and activities. Introverts focus on the meaning they make of the events swirling around them; extroverts plunge into the events themselves. Introverts recharge their batteries by being alone; extroverts need to recharge when they don’t socialize enough.’

Cain describes introverts living in a world that puts a premium on extroversion as being like ‘second class citizens with gigantic amounts of untapped talent’.

Introverts are compelled to spend a lot of their time in ways that they would prefer to avoid, and therefore find it hard to be at their most creative and productive.

Cain’s research has led her to conclude that most creative people are introverts. The short video, below Cain’s TED talk at the foot of this blog, shows just how true this is of author, John Irving. His description of himself in the first half is clearly one of an introvert and has great similarities with Cain’s description of herself at a young age.

She goes further. Solitude, she asserts, is vital for the creative process. At the end of her TED talk, whilst acknowledging the value of collaboration, she says: ‘Let’s stop the madness of constant group work.’

In the book, she cites studies that show that performance diminishes as group size increases: bigger groups generate fewer and poorer ideas compared to smaller groups. She quotes organizational psychologist Adrian Furnham as saying that  ‘evidence from science suggests that business people must be insane to use brainstorming groups.’  Her conclusion is stark:

‘If you have talented and motivated people, they should be encouraged to work alone when creativity or efficiency is the highest priority.’

This extends to the way we organise offices. I recall hating open plan offices, and it seems I am far from alone. Research in many industries all points in the same direction. Open-plan offices reduce productivity,  impair memory, and increase staff turnover. Ironically, they diminish the quality of communication, decreasing motivation, increasing hostility and stress, and leading to more sickness and absence.

What is the solution if you are stuck in an open plan office? Mine has always been to seek refuge when I need to think: in meeting rooms, in foyers (ironically – in fact they tend to be fairly isolating) and in coffee shops.

Susan Cain setting out a summary of quiet in an astonishing TED talk in 2012.

And here is author John Irving speaking of himself in very similar terms.