Tom Peters is a maverick thinker with a provocative style and use of language.  We introduced his work in October 2011.  However, far earlier in his career, while he was still at international consulting firm McKinsey, he co-developed a tool that rapidly fell into the mainstream.

Like last week’s Five Forces Model, the McKinsey 7-S model is provocative in a conservative sort of a way: it can provoke deep insights into your organisation, but is far from revolutionary.  It is radical in the true* sense of the work, rather than in the ‘way out’ sense it has come to adopt.

* Radical, from radix, meaning root.  As in radish.

The Origins of the 7-S Model

The 7-S model was created by Tom Peters and Robert Waterman (and, I am sure I read once, somewhere, another colleague, un-credited in the book) and was published widely in their business best-seller, ‘In Search Of Excellence: Lessons from America’s Best-Run Companies’.  The authors do credit Anthony Athos and Richard Pascale for their help in developing the model.

They acknowledge its ‘obviousness’ but rightly, I think, assert its great utility.  In last week’s Pocketblog, I suggested that Porter’s Five Forces Model needed an additional element to account for the forces within a business.  I think this is a great model for that purpose.  It also serves very well for non-profit organisations in the public and charitable sectors.

Okay, the authors also recognise that, at times, they needed a shoe horn to force the model into Seven Ss, rather than, say 4 Ss and a few other letters.  But it works very well, and the alliterative nature makes it memorable and therefore more useful. 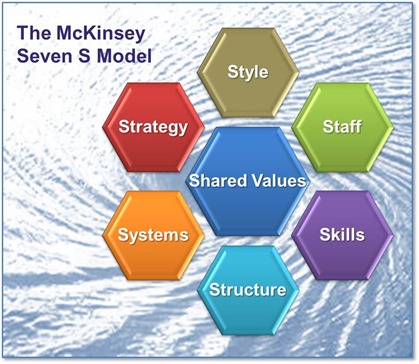 The fundamental tenet of the model is that, for an organisation to succeed, it must bring seven dimensions into good alignment.  Gaps and mis-alignments will be sources of failure or, at least, internal tensions and therefore performance challenges. Let’s illustrate this with an admired company.

At the heart of the model is the need for shared values.  Apple’s whole business is aligned around the values of design and user experience.

Led by  Steve Jobs, the business had a style that combined ruthless attention to detail, with an entrepreneurial flair that encouraged ideas.  People have been free to innovate – as long as they met Jobs’ exacting standards.

Consequently, Apple is able to attract the very best staff, and is very demanding of them.

Staff come with passion and a lot of skills, but Apple invests massively to keep staff at the peak of product knowledge and technical excellence.

I can only speculate about the business structure, but I would expect it to echo the style – loose in the sense that alliances and collaborations are promoted in the development arena, but tight around the operational details, like supply chain and retail.

Apple’s procurement and supply chain systems have become legendary as they have built capacity for launching and supplying huge new market-dominating products.

Under Jobs, the strategy was to focus on a small number of products and to make them innovative and excellent – enabling the business to capture a huge market share relative to its size, and build a loyal customer following.

The 7-s model is represented by seven inter-connected circles arranged with six spaced around the seventh (Shared Values) in the centre.  This networked ‘Atomium-like’ image illustrates well, the network nature of these dimensions and their inter-relatedness.  There is also a big © symbol attached to it so, notwithstanding the numerous reproductions in derivative books and websites, we’ll settle for our alternative representation and a picture of Brussels’ Atomium! 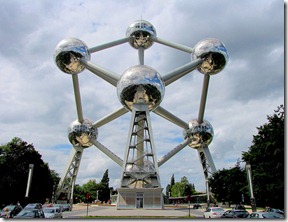 The Atomium
by o palsson