The Management Pocketblog is absolutely bristling with articles about leadership and leadership models. There is a roundup of some of the best at the end of this one and we will make use of them in the exercises within this blog. So, for the Pocket Correspondence course, I want to look at a different model: sometimes called ‘The Leadership Challenge’ after the book that introduced it, and more properly known as ‘The Five Practices of Exemplary Leadership’.

The authors, Jim Kouzes and Barry Posner, researched thousands of personal case studies to extract five core behaviours which they believe represent leadership at its best. These five practices therefore represent a ‘behavioural model’ of leadership, rather than a style or traits based model. The behaviours fulfil five essential roles of a leader.

Along with the model, they have developed a wealth of evaluation and developmental tools that form one of the most coherent packages available to managers who want to develop as leaders.

The Five Practices of Exemplary Leadership 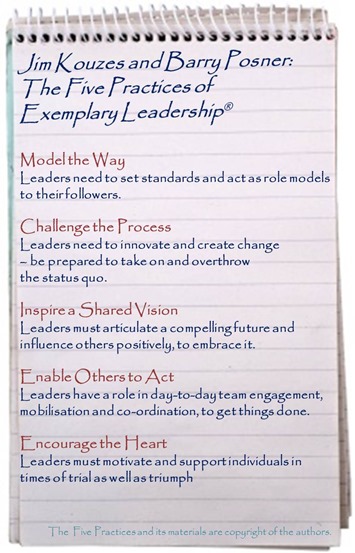 I don’t want to say too much about this excellent model directly, because it would be wrong to infringe upon the authors’ copyright. Instead, I want to use this module for self study.

Exercise 1: Learn about The Leadership Challenge

If you aspire to lead, then this is essential reading and the authors have written a number of books and proprietary resources that are available from your favourite booksellers. But they also make a a wealth of valuable material available for you to look at on their website, at: http://www.leadershipchallenge.com.

Another well-known and valuable role-based model of leadership is John Adair’s Action Centred Leadership. Take a look at it in the earlier blog post: Team Leadership.  What features do they share, and what does each offer to complement the other?

Take a look too, at the four common abilities of a leader in Manager to Leader: Warren Bennis (Part 2). How does this model fit with your emerging understanding?

Thinking about styles of leadership, take a look at the earlier blog in The Pocket Correspondence Course, Situational Leadership. And, whilst there are few formal models about the traits of leaders, the Pocketblog Aubrey and Maturin, Arthur and Merlin highlights the different traits of fictional pairings, both of whom show different styles of leadership: Aubrey and Maturin, Arthur and Merlin, Kirk and Spock, and Holmes and Watson.

The best Pocketblogs about Leadership

What is it that makes an exceptional leader?

This question has been asked time and again through the centuries. And it has been an enduring staple of managerial and business school education through the twentieth and early twenty first centuries.

So is it a surprise when a simple model, articulately expressed, leads to a 2 million-copy best-seller?

Perhaps not. But what makes James Kouzes’ and Barry Posner’s Leadership Challenge remarkable, is its longevity. In the light of the constant flow of new leadership ideas, a model that sells as well after thirty years, must have something valuable to offer.

James (Jim) Kouzes was born. We know that. But there’s little biographical detail available to the casual researcher. He attended John F Kennedy’s inauguration as part of an Eagle Scout honour guard and was inspired by Kennedy’s ‘ask not what your country can do for you…’ sentiment.

So, following his graduation in 1967, with a BA in Political Science from Michigan State University, Kouzes joined the Peace Corps. He served for two years. On his return, he started a career in training and development, giving seminars for Community Action Agency staff and volunteers.

In 1972, Kouzes founded the Joint Center for Human Services Development at San Jose State University. He served there and at the School of Social Work, University of Texas, until 1980.

In 1981, he became Director of the Executive Development Centre at Santa Clara University, where he met Barry Posner. In 1988, he left, to become a Director at TPG/Learning Systems for 10 years, moving to become CEO and Chairman of the Tom Peters Company from 1998 to 2000.

Barry Posner was born in 1949, and graduated with a BA in Political Science from the University of California, Santa Barbara in 1970. He gained an MA in public Administration in 1972, from Ohio State University, and a PhD in Organisational Behaviour and Administrative Theory from The university of Massachusetts, Amherst in 1976.

From there, Posner joined the faculty of Santa Clara University, where he remains today, as Accolti Endowed Professor of Leadership, at the Leavey School of Business.

Working together to develop a talk on leadership, Kouzes and Posner developed their first surveys in 1983. These asked leaders what they were doing when they were at their best. In documenting the practices of exemplary leadership, they have to date surveyed over 75,000 respondents.

The burden of their work is the Leadership Challenges model, which articulates five practices. This has been documented in books, articles, and development tools like card-sets and 360-degree feedback surveys.

The original Leadership Challenge book was published in 1987, and the current sixth edition continues to be a big seller.

The Five Practices of Exemplary Leaders

Model the Way Leaders establish and work to a set of principles for how people should be treated. They create standards for how to do things, and set an example for others to follow. They recognise how bureaucracy can impede action, and so act to reduce unnecessary impediments to meaningful progress. They show people what they expect of them, and create opportunities for success.

Leaders are confident in their capacity to make a difference. They create a vision for the future of their organisation, which they use to inspire their followers. At their best, they influence through charisma, gravitas, and quiet persuasion.  But they also are aware of the need for practical efforts and so incite action too.

Leaders are never satisfied with the status quo. They look out for new ways to improve their organisation. This means experimentation and risk-taking. And because leaders know the nature of risk-taking, they are tolerant of failures and mistakes, treating them as learning opportunities.

Enable Others to Act

Leaders actively involve others to encourage collaboration and build effective teams. They know that mutual respect is crucial if they are to foster extraordinary efforts. So they build an atmosphere of trust and confidence. They empower and develop their team members, to make each person feel capable and trusted.

The kind of changes extraordinary leaders try to make, are hard to accomplish and often risky. They therefore deploy high levels of emotional intelligence to keep motivation going and maintain resilience and determination. They recognise effort and celebrate achievements.

We also covered the Leadership Challenge in our Pocket Correspondence Course series, with three exercises to develop your understanding of leadership models by comparing this with others.

The Leadership Challenge: Interview with Barry Posner and Jim Kouzes