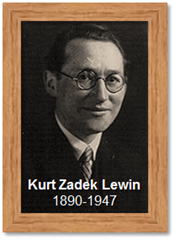 Kurt Lewin is a favourite thinker of Pocketblog’s.  He was an audacious theoretician and a pioneering social psychologist.

He generated many original  and important ideas, but none was as ambitious as what has come to be known as Lewin’s Equation.

Lewin’s equation describes behaviour and was seen, when it was published in 1936, as highly controversial.

It is well-known that whenever a writer includes an equation in her or his text, readers melt away, but HOLD ON: this one is easy!

Now, I know that this looks scary to anyone who hated maths at GCSE, CSE or O level.  So let me explain.  In words, what it says is that behaviour is a function of a person and of the environment in which they find themselves.

Of course, the devil in the detail.  Even if the equation is correct, it does not tell us what measure of the person to take, what aspects of the environment are salient, nor how they combine to affect behaviour.

It doesn’t sound that contentious, but what Lewin was saying was revolutionary in its time.  It is why, in 1936, this was not a trite statement of the obvious.  What Lewin said that was new, is that we behave differently according to the environment we find ourselves in.

Before this, ideas of behaviour assumed that who we are and our formative experiences would inevitably condition our behaviour.  If this were true, then if I can know enough about you – perhaps having seen how you behaved in the past – then I can predict your behaviour.

Now, Lewin has told us that this is, in principle, not possible.  Because every situation is different and the new environment that you find yourself in will change your behaviour.

People are not predictable

Not only that, but the big shift in social science and in economic theory in the last couple of decades has been a steady recognition that neither is our behaviour rational.

Much economic modelling assumes markets are operated by rational agents.  But our behaviour is anything but rational – making our responses to market forces not only unpredictable, but crazy.  Couple that with the speed at which transactions happen, and we have the conditions for rapid and enormous swings in markets.

It is time for greater emphasis on environmental factors in human performance.  Advertisers, marketers and store designers have known this for years.  They have studied the science of light, colour, smell and sound in a quest to influence our buying behaviours.

Yet the success of a business is linked not just to customers’ behaviours, but to those of staff.

How much are you doing to influence the behaviour of your team members, by optimising their environment?  I am going to risk compounding my equation  error, by loading one more equation into the Pocketblog environment:

In words, the environment is a function of Neutral background factors, plus Frustrating factors that constrain performance, plus Advancing factors that promote performance.  Who knows what the function is, or how much each term contributes to it.  But you can always play around with your environment to find how to adjust the balance of factors.  It’s time to try.