Fortune Magazine named him the greatest manager of the Twentieth Century. He took a well-managed and moderately successful corporation and grew it for 100 successive quarters, transforming it in the process. And now he spends his time teaching younger managers to do the same. 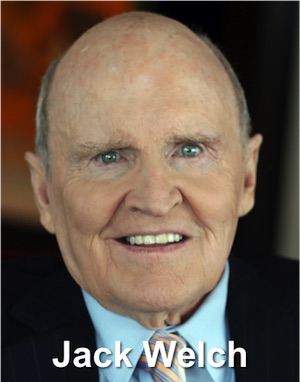 John Francis Welch Jr was born in 1935 and grew up in Massachusetts. He gained a BSC in Chemistry from the University of Massachusetts in 1957 and went on to post-graduate study at the University of Illinois, where he earned an MSc and then a PhD in Chemical Engineering. From there, he joined General Electric, in 1960.

After concerns about the bureaucracy in his first year, a manager persuaded him to stay and from then, his rise through the organisation was steady and fast. He was their youngest General Manager ever, in 1968 and became a divisional vice president in 1972. In 1979, he was a Vice Chairman and Executive Officer, and a year later was named as the next Chairman and CEO of General Electric. He took the post in the autumn of 1981. He set his sights on creating the world’s most valuable company.

He spent the next twenty years growing GE spectacularly, in two phases that we can crudely characterise as ripping down the old (1980s) and building the new (1990s). As soon as he took over, he saw that changes in world business and the then emergent growth of Japanese business would mean that the well-managed but moderate-performing GE would flounder unless he could successfully change it, to compete.

His changes were a great success, growing share price from $4 in 1981 to $133 in 1999, with profits rising from $1.6 billion to $10.7 billion when he left the company in 2001. His retirement has seen the publication of three hugely successful books (co-written with his third wife, journalist Suzy Welch) and the creation of his own business school, the Jack Welch Management Institute, which teaches MBA programmes under the aegis of the private Strayer University.

Ripping Down the Old – How Welch Disrupted GE in the 1980s

Having torn down what Welch perceived as not working, in the 1990s, he turned to creating a set of sustainable practices.

The upshot of all of this was not just spectacular growth, which other great CEOs have achieved. Welch was able to create a lasting change that persisted under the next CEO.

Welch is well known for coining pithy soundbites. Here are a few favourites.