David McClelland is best known to managers for his theory of Motivational Needs,which we covered back in 2012. He was a giant of the twentieth century psychology community, whose ideas remain relevant, practical, and valuable to manangers today. 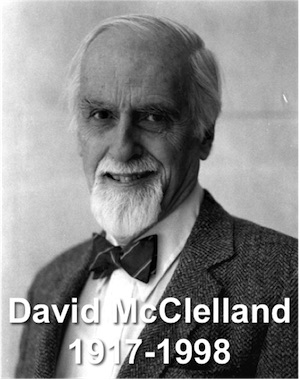 David McClelland was born in New York state, in 1917 and grew up in Illinois. He gained his Bachelor’s degree in psychology in 1938, from Wesleyan University, a Master’s from the University of Missouri, and a PhD from Yale in 1941. He went on to teach at Connecticut College and then, as professor, at Wesleyan University. In 1956, he joined the Harvard University faculty as a professor, and he stayed there until his retirement to Professor Emeritus, in 1986. However, it’s hard for an active mind to stay retired, so in 1987, he started teaching at Boston University, continuing to do so up until his death in 1998.

Along the way, McClelland published many important books, few of which remain in print. Of those that do, the most notable are:

He also co-founded with David Berlew (and Chaired) a business consulting firm, McBer and Company, that trained and advised managers in recruiting and developing staff. McBer is now a part of the Hay Group.

McClelland made two primary contributions that managers should know about. The first and best known is his psychological theory of three key motivators that drive our performance in the workplace. He applied this to corporations, small businesses, the medical profession, higher education and to large scale economic development.

He also developed the work of Henry Murray to create a “Thematic Apperception Test‘ That allows trained users to evaluate the balance of these needs in an individual, based on their story-telling response to imagery.

McClelland studied how different balances of these three motivators impact people’s performances in different job roles. For example, he concluded that the most senior managers and leaders do not fare well if they have a dominant need for achievement. Rather, they tend to have this (and a need for affiliation) at moderate levels, with a high need for power.

Entrepreneurs and middle managers, however, thrive best with a high need for achievement. So much so, indeed, that McClelland believed that a nation’s economic development was dependent on the level of need of achievement among its citizens. This is what leads, he says, to setting big (but realistic) goals, taking calculated risks, and feeling a sense of personal responsibility for our work.

In the 1960s, McClelland took what was then a radical perspective on successful recruitment. He argued that we should hire for demonstrated competencies in the area of work we need people to perform and not, as was common in the US at the time, for IQ levels and the results of batteries of personality tests. This does not seem so revolutionary now, but it is well to be aware of when this idea started to emerge. His company, McBer, was at the forefront of developing lists of competencies.

More recently, his ideas have been applied to the workplace by popular psychologist, Daniel Goleman – particularly in his 2002 book, The New Leaders: Transforming the Art of Leadership, but also in his earlier, 1998 book, Working with Emotional Intelligence.

There is an excellent interview with McClelland, from the end of his life, at: orientamento.it/indice/interview-with-mcclelland/

For more on motivation:

For more on McClelland’s theory in particular: