We apologise for the one day delay in the publication of this blog. Its subject, David Brent, is such a massive thought leader in the management arena, we wanted to be sure we had chacked our fects, spoted all tipographic errers, and sourced each quote with precision.

In a few short years, one manager transformed the attitudes of a nation about what management can mean, and the true value of openness, inspirational leadership, and humility. That manager – the ‘manager’s manager’ if you will, is David Brent. 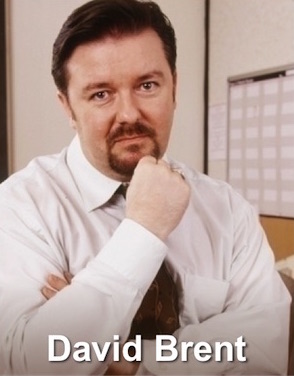 Little is known about David Brent’s life story. Much of it has to be pieced together or fabricated from fragments of myth and legend, so great is this icon of management. He was born in 1961 in Slough, England, and attended school there, gaining ‘good’ O levels, and following it up with attendance at The University of Life.

What is known for sure is that his talents were spotted early and he was promoted through the ranks of Slough-based paper merchant Wernham Hogg, to become Regional Manager. In 2002, he left Wernham Hogg and moved back into sales for a short time, before launching a music career, fronting the band, Foregone Conclusion. When leaving Wernham Hogg, Brent was recorded as saying: ‘My world does not end within these four walls, Slough’s a big place. And when I’ve finished with Slough, there’s Reading, Aldershot, Bracknell, you know I’ve got to-Didcott, Yately.’

Emblematic of his management style, in an interview with speaker agency Cooper & Webb, Brent described his particular expertise as ‘motivation, leadership and having a laugh’. Brent is known to be resentful of the makers of a BBC documentary, The Office, which he feels showed him in a bad light.

Like some of the world’s greatest thinkers, such as Wittgenstein and the Buddha, Brent often spoke in short but profound aphorisms. Here are some of the most thought-provoking. Rather like Zen koans, some demand hours of meditation before true enlightenment of the depth of their meaning will strike you.

Therefore, just as the Zen that is spoken is not the Zen, I offer these meditations without comment. They don’t need it. Brent’s wisdom speaks for itself.

‘I don’t live by “The Rules” you know, and if there’s one person who has influenced me in that way of thinking, someone who is a maverick, someone who does ‘that’ to the system then it’s Ian Botham.’

‘Trust, encouragement, reward, loyalty… satisfaction. That’s what I’m… you know. Trust people and they’ll be true to you. Treat them greatly, and they will show themselves to be great.’

‘They’re malleable, and you know that’s what I like really, you know. I don’t like people who come here: ‘Ooh, we did it this way, we did it that way’. I just wanna go do it this way. If you like. If you don’t… Team playing-I call it team individuality, it’s a new, it’s like a management style. Again guilty, unorthodox, sue me.’

‘When people say to me: would you rather be thought of as a funny man or a great boss? My answer’s always the same, to me, they’re not mutually exclusive.’

‘The thing is though, no-one’s dispensable in my book, because we’re like one big organism, one big animal. The guys upstairs on the phones, they’re like the mouth. The guys down here, the hands.’

‘Does a struggling salesman start turning up on a bicycle? No, he turns up in a newer car – perception, yeah?’