In my naiveté, I have always thought the arguments for diversity were self-evident. One look at the politics of any nation, and of the world as a whole, is enough to prove that this is clearly not the case. So we must be grateful to people like Sylvia Ann Hewlett, who are making the case. Here is a woman who has established a research centre, writes extensively, consults with global corporations, and speaks out in the media.

Sylvia Ann Hewlett was born in 1946 and grew up in South Wales. She took her MA at Cambridge University and then went to Harvard as a Kennedy Scholar. She returned to the UK to study economics at the University of London, where she earned her PhD.

Hewlett returned to the United States, becoming an Assistant Professor of Economics at Barnard College. From there, she went on to become Head of the United Nations Economic Policy Council.

In 1987, Hewlett quit the role and started writing, which she has continued steadily. She has authored a number of books, and many articles in premium magazines and online journals. In 1993, she founded the Center for Work-Life Policy in New York. This is a not-for-proft research institute, which studies diversity and talent management. It is now called The Center for Talent Innovation, and its work has been widely published, particularly in the Harvard Business Review.

Hewlett followed this up by creating a commercial business, now called Hewlett Consulting Partners, which works with large corporations to implement ideas around diversity and talent management.

There are two big themes in Hewlett’s work:

Early in her career as an author and thinker on these matters, Hewlett’s primary focus was on gender. More recently, she has opened this out into many dimensions of diversity , such as geography, culture and ethnicity, sexual orientation, and generation. Indeed, in today’s (autumn 2016, ahead of the presidential election) United States, it is not surprising to find a lot of her public comment focusing on the role of Latino workers, and also women of colour and the LGBT community.

One of Hewlett’s recent books is 2014’s ‘Executive Presence‘, which I suspect is her biggest seller. Aimed primarily at women, but valuable for anyone who wants to be seen as a potential or actual leader, the book sets out three elements you need, to project ‘presence’. These, Hewlett suggests, are all learnable.

Filled with anecdote and structured checklists, this is one of the stronger books on a topic that is hard to pin down with real evidence. At what stage does a large body of anecdote become empirical data? I shan’t answer that question.

The books reports wide surveys of executives, that give evidence for what makes up these three overlapping dimensions. Curiously, a critique of the research is its bias towards US culture.

Gravitas, for example, is made up of:

Fundamentally, it is your ability to be seen and valued as a real expert in your subject matter.

Admiral Michelle Harris is the first woman and the first African American to be promoted to a four star role in the US Navy, and the first African American woman both to command a ship, and later, to reach three-stars. She was recently appointed to be the US Navy’s vice chief of operations – its second-highest-ranking officer. She was also the  officer who masterminded the rescue of Captain Richard Phillips from Somali pirates – later dramatised in the Tom Hanks movie, Captain Phillips. 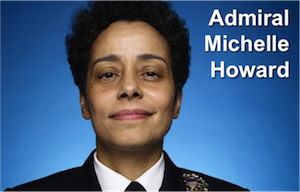 Michelle Howard was born in 1960 to an American father and British mother. Her father was a Master Sergeant in the US Air Force. She graduated from the US Naval academy and then earned a master’s degree in military arts and sciences in 1998 from the Army’s Command and General Staff College. When she took command of the U.S.S. Rushmore in 1999, she became the first African-American woman to command a ship in the US Navy.

From her earliest days as a junior officer, Howard was recognised as an outstanding leader. On only her second posting, aboard USS Lexington, she received the Secretary of the Navy/Navy League Captain Winifred Collins award for the one woman officer a year showing the most outstanding leadership.

But it has not always been easy. Howard said in an interview with Ebony magazine in 1999 that, in the course of her career, she encountered ‘individuals who didn’t want me at the command, or didn’t want me in a particular position.’

Speaking about the obstacles she has faced as an African American woman, she said in a 2010 talk about women and minorities in the Navy: ‘This is not for wimps.  You have to keep a sense of humor. You have to develop stamina because there’s going to be tough days. Like the pioneering women of old, you have to let some things go.’

But, for this blog, the most valuable interview is the one that she recently gave to Forbes Magazine, which you can read in full, and watch  extracts below.

The five leadership lessons that Howard offers are powerful indeed, not least because of the authority and careful consideration she brings to them.

I shall not give more detail, because you can readily read it on the Forbes website. Please do.

You might also enjoy the Leadership Pocketbook and the Diversity Pocketbook.

Peter Honey wrote a thought-provoking blog on the Training Journal website, where he opened by taking as read that valuing diversity is a good thing (my italics), but then he asked a really good question:

‘If we were going to start doing it at 0900 tomorrow morning, what exactly would we do?’

As usual, Peter gives a very good answer to his own question, but, also typical of him, his question really made me think.

But that was a couple of weeks ago…

The topic came back to me last night (Saturday 7 May) when I was watching a documentary about the Untold story of the Battle of Trafalgar.  It looked at the foreign sailors who fought on one of Nelson’s ships of the line, HMS Bellerophon and made the point that, for the few years of the war with Napoleon, the British Navy treated its black sailors better than Europeans had ever treated black people, and better than they were to do so for many years: it gave them total equality of opportunity.

Black and other foreign sailors were treated exactly the same as all others and promoted and respected strictly according to merit.  Perhaps that is the answer to Peter’s question.

After the war, however, it was back to colonialist business as usual, as the black sailors, who were no longer needed, were abandoned to the streets.  You can watch the video here.

I have no special expertise in the subject of diversity, just the simplistic view that evidence shows that diverse teams get better results.  That’s why Peter’s question so impressed me.  So I thought it was time to read the Diversity Pocketbook.

What I found was a nice little model that can apply to many different change projects.  The author, Linbert Spencer, may forgive me for turning it into a simple picture. 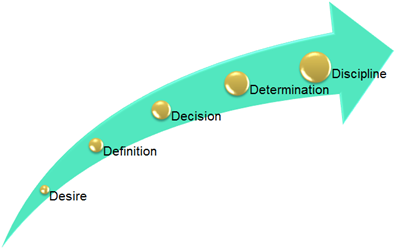 Desire
How strong is it, really?

Definition
What do you mean by ‘diversity’?

Decision
A formal commitment from all the people who have real authority.

Determination
This is not an easy process.  You need to be in it for the long haul.

Discipline
When you make progress, celebrate, but keep up your commitment

So Here’s the Deal

Linbert Spencer offers a structured process to answer Peter Honey’s question.  He also gives lots of practical tips to supplement Peter’s eminently sound advice.  This does matter, because in tough times like these, you can’t afford to waste any opportunity to get the best team and to get the best from your team.