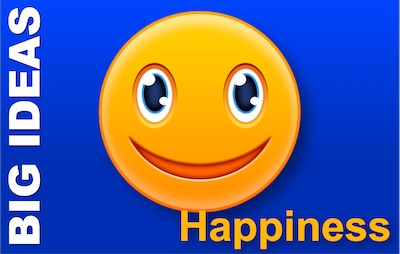 What better way to start the year than with an introduction to the science of Happiness?

And it’s not just a thriving area of scientific research. It’s also a predictably fertile topic for popular science books. On my shelf, I have:

And I have stopped collecting.

END_OF_DOCUMENT_TOKEN_TO_BE_REPLACED

It is still true that, for most of the history of the discipline of psychology, academics and practitioners have focused on the minority of people whose lives are diminished by their psychological state. But most of us are not and, indeed, some are happy and flourish. Wouldn’t it be a great idea if psychologists turned their focus on understanding this and finding ways to make more of us happy and all of us more happy? That was the question posed by one man, more than any other, and that was Martin Seligman.

Martin Seligman was born in 1946 and grew up in New York. He earned his bachelors degree in philosophy from Princeton, and then moved to the University of Pennsylvania, where he gained a PhD in psychology in 1967, studying learned helplessness in dogs. This is the effect whereby the majority of animals subjected to harsh treatments give up resisting and, even when they are able to escape the discomfort, they do not do so. This work, whilst seen widely as important, has been criticised on animal welfare grounds and  probably could not be recreated at universities in the US or many other countries.

Seligman extended his research into the implications for people, moving on to study depression. He worked as Assistant Professor at Cornell from 1967 and was awarded a full professorship at the University of Pennsylvania in 1976, where he remains today, as Professor of Psychology and Director of the Positive Psychology Center.

His research led him to write a major textbook on abnormal psychology that was published in 1997, a year after he was elected President of the American Psychological Association. In his inaugural address in 1998, he announced the theme of his presidency would be Positive Psychology. He wanted to move the focus onto the ways that research can be made practical in helping people to thrive and be happy. The term Positive Psychology had been coined by Abraham Maslow, a founder of humanistic psychology, which focuses on strengths and potential rather than neurosis and pathology. Maslow was a theorist who gathered little experimental evidence to support his ideas. Seligman was determined that empirical research is necessary.

Seligman is now very much seen as a leader – maybe ‘the’ leader – in positive psychology today. He is Director of the Positive Psychology Center at the University of Pennsylvania and has authored many widely read and respected popular books on the subject, as well as scholarly papers.

His most widely read books include:

Perhaps the idea that most closely attaches to Seligman is the idea of Character Strengths and Virtues, and the free Values in Action assessment of your signature strengths. This allows you to fully reflect on where your true strengths lie, based on Seligman and Christopher Peterson’s framework of six main character virtues and the three to five components of each. The six virtues and their strengths are:

Seligman extended this idea, by looking at what makes us happy. His simple model successfully combines the aspects of self-interest and community contribution that have divided philosophers for millennia. He argues that there are three dimensions:

A life of comfort, pleasure and gratification is the start to happiness…

But to be truly happy we also need to put our strengths to work. In this way we can fully engage with what we do, and enter what Mihalyi Csikszentmihaly calls flow states. For a truly fulfilling life, however, we need…

We acquire a meaningful life when we are able to deploy our strengths not just for our own benefit, but for the benefit of others, for society or for ideas that we feel to be bigger than ourselves. We need to contribute. In this, of course, we can see the influence of Maslow very clearly.

In Seligman’s latest book, Flourish, we see his summary of work to date, in a simple mnemonic that points us to what he sees as the five sources of wellbeing – necessary conditions, if you like.

Positive emotion – how good you feel.
Engagement – the total immersion you get in a flow state.
Relationships – with friends, family, and society, through collaboration, care, and intimacy.
Meaning – finding something you perceive as a purpose that is bigger than yourself.
Achievement – the sense of fulfilment in achieving something for its own sake, rather than for the sake of e=positive emotion,  meaning, or relationships.

Other Pocketblogs to look at…

The new era of positive psychology

Tomorrow, it is 2014 and the Pocket Correspondence course resumes with Volume 3: Organisational Management. It will cover operations, strategy and project management in the first quarter, and business services, finance, sales and marketing in quarter 2.

So, some of the topics you can look forward to are:

And, keep an eye open for a special announcement…

We’ll say no more at this stage.

If you are reading this:

It is Adult Learners’ Week again.

It only seems like yesterday when we did our first Adult Learners’ Week blog.  Do you remember what the Three R’s really stand for?  If not, check back to last year’s blog.

What is Adult Learners’ Week?

Adult Learners’ Week is a campaign that ‘celebrates learning and learners in all their diversity, inspiring thousands of people each May to try something new. The initiative promotes the benefits of all kinds of learning, whether it is for fun or leading to a qualification.’

Happiness is on everyone’s agenda

The Saturday and Sunday papers are full of ‘happiness’ articles.  New Scientist (my favourite weekly) did a feature on it in April and Martin Seligman (the founder of Positive Psychology) has a new book out (Flourish: A New Understanding of Happiness and Well-Being – and How To Achieve Them).

Of course, with spring in the air, it is a good time to feel happy, but what has this to do with Adult Learners’ Week?

A few weeks ago, I wrote a blog about flow.  Flow is a state where you become so immersed in something that time seems to stop, so that, when you finish, you have hardly an inkling of how much time has passed?  You may only then realise how cold, how hungry or even how desperate you are for the loo.

The originator of the concept and author of a fantastic book on the subject (Flow: The Psychology of Happiness) is Mihaly Csikszentmihaly.  Note the subtitle of the book: in it, he describes flow states as states of great pleasure and enjoyment.  So forget wealth, parties and drugs: get immersed in something with a clear goal and evident measures of progress, which stretches you to perform at your limits.

Let’s re-read the last part of that last sentence:

‘…get immersed in something with a clear goal and evident measures of progress, which stretches you to perform at your limits.’

This describes Csikszentmihaly’s three criteria for a flow state: a goal, feedback, and challenge.  It also is the definition of learning: knowing what you want to be able to do, understand, or create; being able to monitor your progress; and moving beyond your present capabilities.

The Fourth R (and maybe a fifth)

I hope that, by now, you’ll be curious enough to have discovered what the original three R’s were.  So I am ready to add my own extra R:

Perhaps a fifth my be:

Back when I did maths at school, we took a little foray into classical logic, which is based on maths, of course.  We learnt about robust and faulty reasoning, and in particular, I recall the concept of syllogism.  Take two statements:

Stephen Hawking was told by his publisher that every equation he put into ‘A Brief History of Time’ would halve its sales.  He didn’t do so badly!  So I’ll take a chance and put one of my own into this blog, knowing you don’t pay to read it anyway:

So here’s the Deal

If it is not already a habit, make this week a week to learn.  Here are ten top tips for how.

It’s tempting to say: ‘all of them’ but let’s face it; we all have our favourites and there are some you won’t like as much.  So, as a learner, or a trainer, or a teacher, here are some pocketbooks you might like:

Teaching
(Thank you to our sister blog,
The Teachers’ Pocketbooks Blog)