John Kotter was a star academic from an early age and is now regarded as one of the leading thinkers, researchers and consultants on organisational change. He is equally known for his earlier work on leadership. But for Kotter, the two cannot be separated:

Kotter says. And change is the function of leadership. 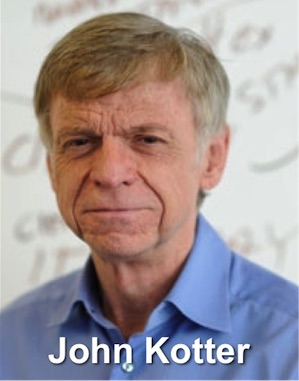 John Kotter was born in 1947, in San Diego, California. He moved to the east coast to gain his bachelor’s degree in electrical engineering from MIT (1968), his SM in management from MIT’s Sloan School of Management (1970), and a DBA from Harvard in organisational behaviour (1972).

Kotter stayed on at Harvard, becoming a tenured professor at 33, in 1980, having already published four books. It was his 1982 book, The General Managers, and the accompanying Harvard Business Review article, that started to make his name outside of academic circles. This set out the need for a general manager to master both the competencies needed to run their business and the relationship-building skills needed to extend effective networks throughout the wider organisation.

In a series of books, Kotter established himself as adept at distilling direct observation of what happens inside an organisation, into general principles that others can learn from. Key books include:

In 2001, Kotter retired from his full time faculty role and became professor emeritus, retaining Harvard Business School’s Konosuke Matsushita Chair of Leadership, which he has held since 1990. in 1997, he published a biography of the Japanese entrepreneur who endowed the chair: ‘Matsushita: Lessons from the 20th Century’s Most Remarkable Entrepreneur‘.

Kotter’s current activity focuses around Kotter International, the consultancy he co-founded in 2008. He is reputedly one of the most in-demand and highest paid speakers on the US corporate speaking circuit, with fees allegedly starting at $75,000. You can hear a flavour of him as a speaker on his YouTube Channel.

Kotter’s observations led him to concur with Warren Bennis that there are differences between management and leadership. While managers’ roles include organising, controlling, planning and budgeting, Kotter argued, in A Force for Change, that there are three principal roles for a business leader:

For Kotter, then, leadership is all about change. More than most of his contemporary leadership commentators, Kotter veers towards the ‘leaders are born’ end of the scale, arguing that the best exhibit traits that go beyond what they can learn: energy, intellect, drive and integrity. But he does acknowledge that experiences shape leadership, noting that diverse and tangential career opportunities help shape leaders beyond the narrow confines of management.

Kotter’s transformative book (and the most reprinted ever Harvard Business Review article that accompanied it: Leading Change: Why Transformation Efforts Fail) was ‘Leading Change‘. This set out to show that managing change is not enough; change needs to be led. The book is widely regarded as a classic in the business/management field and was one of Time Magazine’s 25 most influential business management titles (along with books by many of the Management Thinkers covered in this blog series).

in the article and book, Kotter sets out an 8 step process for leading change, and argues that companies fail to deliver successful transformation when they do not pursue all of the steps, in the sequence, with sufficient attention. These steps embody much earlier thinking – in them, we can see the shadow of Kurt Lewin’s Freeze Phases, for example. What makes them particularly valuable is the clarity with which Kotter sets out the tasks leaders face, and the illustrative examples he gives.

In 2002, he co-authored Heart of Change with Deloitte Consulting’s Dan Cohen, in which they focus on case studies to illustrate this further. I have a strong memory of Cohen presenting at a US conference I attended towards the end of my time with Deloitte. The clarity of this approach rang out for me.

To further clarify, Kotter then co-authored Our Iceberg is Melting with Holger Rathgeber. This book turned the whole 8-step process into an allegorical tale of a penguin who becomes aware of global warming and needs to influence change among his compatriots. Would that more climate campaigners could learn some of these lessons. I guess this book was targeted at the market that made Spencer Johnson’s ‘Who Moved my Cheese?‘ (another Time top 25 book) such a huge success. Whilst Cheese focuses on the personal effects of change, Iceberg teaches how to lead change.

2010’s book ‘Buy-In‘ set out to help leaders make their case, but it was Kotter’s latest, 2014 book, ‘Accelerate‘ that has moved his thinking forward. Yes, Kotter International uses slightly new terminology around the 8 steps, but the main change that Accelerate introduced was a greater sense of urgency to the process, the consequent need for concurrency of the steps, and a determination that complex organisations need to introduce elements of a more agile, entrepreneurial approach.

The comparison of the older and more recent approach is this:

Kotter has stayed at the forefront of thinking about organisational leadership. He now argues that constant disruption from turbulent market shifts is the biggest challenge business leaders face. And agility is the skill they need. Perhaps not surprisingly, his HBR article ‘Accelerate!’ is another of their most widely requested reprints.