Pick your favourite epithet: Tom Peters has been described as a gadfly, a showman, a curmudgeon, , an agent of chaos, and a guru (even an uber-guru). He is all of these and more. Whatever his contribution to management thinking, Tom Peters certainly has been influential, becoming a multi-millionaire on book sales alone. 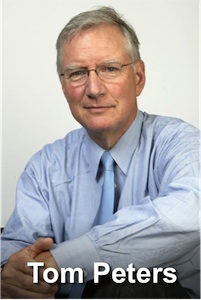 Tom Peters was born in 1942 and grew up in Baltimore. He went to Cornell University on a US Navy scholarship, where he earned a bachelor’s degree in Civil Engineering. He then served for four years in the US Navy, including a tour in Vietnam and one at the Pentagon. Following that, he went to Stanford University, gaining a PhD in Organisational Behaviour, in 1973.

In 1974, he joined US management consulting firm McKinsey, where he quickly became a partner in 1977. The firm specialised (and still does) in corporate strategy, but Peters soon discerned that their offering was poorly rooted in what was actually happening in large US corporations. He took on a major research project.

When he left McKinsey in 1981, he (along with co-author, Robert Waterman) used some of that research as the basis of his first book: ‘In Search of Excellence’. This drew lessons from what they then viewed as ‘America’s best-run corporations’. The book became a multi-million dollar best-seller, and created a reputation that Peters went on to capitalise upon fully. He pursues his business interests through The Tom Peters Company.

A series of books have followed, each one supplanting the last, as Peters senses and responds to the changes in the business environment. We’ll look at his ideas through four of them, but a fuller list includes:

In Search of Excellence

In studying 43 organisations – among the biggest (and, at the time, what they thought were the best) in America, Peters and Waterman drew some simple conclusions about what made them the best. These organisations included P+G, HP, GE, IBM, J+J, and some others that were not best represented by initials! Among the conclusions that they drew were that excellence comes from doing the basics, but doing them extraordinarily well.

Other conclusions were that the best organisations:

At the heart of this was a rather nice model that the authors developed while at McKinsey: The 7S Model. This started an anti-rationalist trend that has grown in Peters’ thinking – moving away from data-driven and numerical models of business strategy and behaviour (that his engineering background might lead us to expect) to a more strongly humanistic and subsequently near-random view of how organisations should work. In simple terms, the 7S model asserts that organisations need to fully integrate shared goals with strategy, systems, style (culture), staff, skills, and structure.

None of their conclusions seemed revolutionary. Indeed, this was the strength of the book – a huge body of evidence supporting good common sense. The authors have always acknowledged this.

Sadly, it was not long before evidence emerged that some of ‘America’s best run corporations’ were not, in fact, doing so well. Happily for Peters and Waterman, though, the book had already sold millions – and continued to sell well. But Peters felt the need for a response. This came, in book form, in 1987, with…

Why were the lessons of In Search of Excellence not always predictive of success? Because the rules of business have changed. We are in a time, Peters said, of uncertainty and accelerating change – what we now call a VUCA world (Volatile, Uncertain, Complex, and Ambiguous). This led him to state, memorably:

‘There are no excellent companies’

In a changing world, companies need to change – sticking to the knitting will not give you the flexibility you need to survive. This is a point that is being made afresh by the subject of last week’s Pocketblog, Nilofer Merchant.

Despite this, Peters still believed the core of In search of Excellence was valid, but that we need to add new thinking:

The rules had changed, and it was not long before Peters was on the track of the new master-rules for success. In 1992, he introduced his new thinking, with…

Don’t just respond to customers, build your organisation around creating, maintaining and growing your relationships with customers. The future, said Peters, will be all about flexibility and interconnected social networks. Corporations will need to be agile, forming and re-forming teams and structures rapidly. And what is the unit of exchange in these organisations? Knowledge. Not only is it the primary capital of the new economy, but it is the currency that buys ideas and innovation.

Liberation management was a very clear start of a shift in Peters’ thinking towards informal, radical, crazy business thinking, that reached its zenith (some would say nadir) with…

This startling book is the acme of later Tom Peters style. It completes the journey from a dull academic thesis, to a highly readable but conventional first book, to innovative ideas presented in a folksy, simple way, to the soundbite driven 50List books, to this mix of text, images, soundbites and shouts. It rehearses many of his earlier ideas and presents them in a startling and repetitive way. By turns, the book is provocative, insightful and infuriating. At places, I found it literally unreadable. Look at the Amazon reviews – for such a prominent author, they are, to say the least, unusual.

So what is there to say of Peters?

Peters makes his money writing, lecturing and speaking. His seminars and platform performances are barnstormers and he has topped the corporate circuit for many years, as other figures have come and gone. He is often accused of pandering to the masses of business managers and leaders who flock to hear him. But two things are undoubtedly true of Peters:

Firstly, he is adept at sniffing the wind
His perception of what is going on in corporate America is acute and he is adept at spotting the trends and building a reasoned case that he communicates in a didactic – sometimes ranting – style

Secondly, he makes people think
His simple style is certainly engaging and his ideas are thought-provoking. Agree with him or not, you can hardly help engaging. And this is what many  thousands of executives do, every year. And that makes him influential.