The engineer behind many aspects of the Toyota Production System (TPS) can justly be described as instrumental in creating one of the world’s great manufacturing businesses. But his influence goes far wider, with many of the management ideas that we take for granted originating as a part of the TPS. I promised you we’d look at him when we examined the lessons from his boss, Eiji Toyoda, so let’s see what we can learn from Taiichi Ohno. 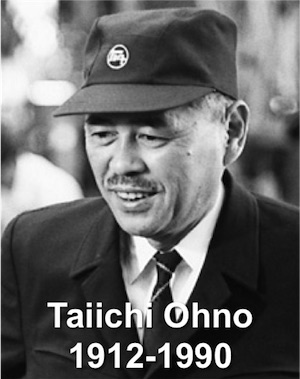 Taiichi Ohno was born in China, where his father was working on the Manchuria Railway, in 1912, and grew up in the Aichi prefecture of Japan, attending the Nagoya technical High School. In 1932, he joined the Toyoda Automatic Loom Works, which had been established by Sakichi Toyoda, who was highly innovative in the looms he designed and built. When Toyoda sold off the loom business to a British company, he determined to invest the money in an automobile business, to be headed by his son, Kiichiro Toyoda.

Kiichiro Toyoda set out to learn from US motor manufacturers, and started manufacturing vehicles in 1936 and it was he who first introduced the idea of ‘Just in Time’. However, it was when Taiichi Ohno was tasked with increasing productivity that the company started to make the breakthroughs which would later form the groundwork for Toyota’s great commercial achievements of the 1960s onwards, under Eiji Toyoda.

In looking at Toyota’s productivity levels shortly after the war, Ohno realised that the gap in performance between Toyota and the top US manufacturers of a factor ten could not be due solely to a poor Japanese workforce. He considered that the significant factor was waste; ‘Muda’. As he experimented, and took on board Kiichiro Toyoda’s ideas of Just in Time production, he gradually, over the years from 1945 to the mid-1970s, built up a coherent set of principles and practices that has come to be known as the ‘Toyota Production System’.

Towards the end of his life, Ohno spoke and wrote extensively (most notably: ‘Toyota Production System: Beyond Large-Scale Production‘) about the TPS – perhaps more than his superiors really felt comfortable with. In doing so, he frequently used the metaphor of a supermarket to describe how Just in Time principles work. He had first seen, and been captivated by, supermarkets on a visit to the United States in 1956. Ohno died of heart failure in May 1990.

The three principles at the heart of the the Toyota Production System are easy to state:

As if the phrase Just in Time has not become well-enough known, it is supported by an idea and a practical tool that have each become central to manufacturing processes world-wide… and, indeed, to other business and organisational processes.

The first of these – and Ohno’s starting point for his reforms – is the idea of waste, or ‘Muda’. Ohno waged a systematic campaign to eliminate all possible forms of waste. In so doing, he identified the seven categories that are often known as the ‘Seven Wastes’.

Some people add other wastes to Ohno’s original seven, most commonly placing Non-used employee talent (wasting skills) between number 3 and 4 in my ordering, so create the mnemonic acronym: DOWNTIME.

Ohno also developed a system of signboards that track progress of goods through the manufacturing process, which are called ‘Kanbans’. The kanban board is now widely used to track progress in projects throughout commerce, especially in managing software projects under agile project management methodologies.

Ohno examined every part of the manufacturing process and looked for ways to reduce errors, increase safety, and improve reliability. When he found them, he instituted rigorous staff training. The principle of building quality into everything is ‘Jidoka’. And, although he did not originate the idea of continuous improvement, known as ‘Kaizen’, Ohno’s concept of Jidoka involved daily improvement in a cycle of detecting problems, stopping production, removing the cause of the problem, and then incorporating the improvements into the standard workflow.

Another of Ohno’s greatest innovations is his problem solving methodology, the Five Whys, a way of getting at the root cause of a problem. This intelligent approach to stopping a machine when a fault arises and injecting human problem solving is Ohno’s idea of intelligent automation, or ‘autonomation’; ‘ninben no tsuita jidoka’.

Instead of seeing a factory as a series of inter-connected processes as Henry Ford had done, Ohno saw it as one continuous connected process. And ensuring that its efficiency is optimised is the idea of work levelling; ‘Heijunka’. This is central to eliminating waste, or Muda and is about rearranging (dynamically) the allocation of work to ensure that every resource is fully utilised at all times.

Many of Ohno’s ideas seem obvious to us now but they did not at the time. And, inevitably, he encountered much resistance from the Toyota workforce. He employed one principal strategy to deal with this, that had two simple components: patience and persistence. Evolving the Toyota Production System took thirty years and, no doubt, it is ongoing today.

Adoption outside of Japan

Outside of Japan, Ohno’s ideas have been widely adopted and modified. The TPS is now more generally known as ‘lean manufacturing’ and the principles of lean thinking are increasingly being applied throughout the economy in sectors like retailing, services, telecommunications and even government service.

There does seem to be a difference, however, between Ohno’s and the two Toyodas’ philosophy and that of modern western businesses with which I am familiar. Here, we see organisations seeking to use lean principles to ‘sweat their assets’ to cut staff numbers and compel them to work harder to achieve greater productivity with fewer resources. Toyota instead thought that by making its process more efficient, its workforce could produce more without significant increases in the cost base, and so exploit new markets to create more profit.

At the heart of this is a different approach to pricing. The Western approach is to lower your cost base as low as you can, to determine a profit level, and then to sell at the price that these dictate.

Toyota’s success was build on a different philosophy: that the market fixes the price it will pay, and you optimise your processes to set your unit costs. Your profit is the difference.

Toyota describes the Toyota Production System on their website, at: http://www.toyota-global.com/company/vision_philosophy/toyota_production_system/