Nilofer Merchant may teach innovation at Santa Clara University, but she does so with a track record as a practitioner and an armful of interesting ideas. 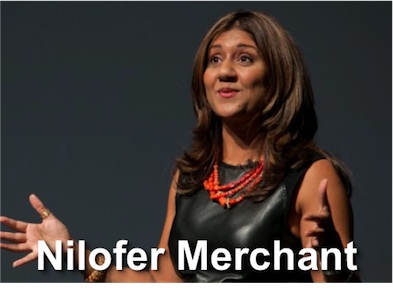 Nilofer Merchant was born in Mumbai, India, but came to the US at the age of five. While at high school, she packed her bags and left home to avoid an arranged marriage that would have denied her the college education she craved. She got her BSc in Economics at the University of San Francisco in 1992. She later got an MBA from Santa Clara University. Her first job was as an admin assistant at Apple, but her talent for asking questions that reveal answers allowed her to move up that organisation and move into senior executive roles at GoLive (which was acquired by Adobe in 1999) and then Autodesk.

From there, she set up her own innovation and technology consulting business, Rubicon Consulting, made it a success, and then wound it up ten years later. Her current career is as an author and a much sought-after speaker, sharing her provocative ideas. In 2013, she won the Thinkers50 Future Thinker award. Merchant is author of two books: 2010’s ‘The New How: Creating Business Solutions Through Collaborative Strategy‘ and 2012’s ‘11 Rules for Creating Value In #SocialEra‘ (and yes, there really is a hashtag in the title!)

It’s New Year in two days, so you won’t want to read a long blog. So I will summarise Merchant’s ideas as best I can in short snippets, and then hand over to her in two TED talks: one, with over 1.5 million views, and the other a trail for a book she has contracted to write for Viking (Penguin in the UK). They published Susan Cain‘s ‘Quiet‘ and I suspect ‘Onlyness’ may have a similar level of impact.

Merchant sees today’s core business as the source of funding for developing tomorrow’s. Success grants you the opportunity to invest in building the next source of revenue.

Too many of us are far too sedentary in our day-to-day work.

This will be the topic of Merchant’s next book – and see the video below. We each have a distinctive story and our own ideas. It is how we connect ours up to to the distinctiveness of others that is the source of creativity.

Many of us (me included) are now solo-workers – freelance, ‘solopreneurs’. Organisations of the future will need to find ways to connect talent in order to innovate.

Got a Meeting: Take a Walk

Merchant’s 2012 TEDx talk will become big, because she has just announced a book deal. This is the core of her current thinking.