Is it possible to think yourself rich?

Is it possible to define a hugely successful business through careful consideration?

I think the answer is yes, and the evidence is Jeff Bezos. 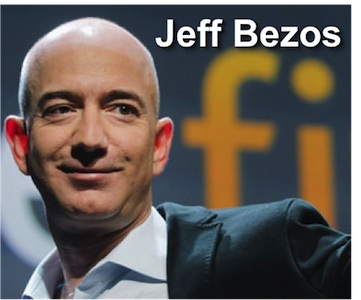 Jeff Bezos was born in 1964 and grew up in New Mexico and on his grandparents’ ranch in Texas. From an early age, he enjoyed tinkering and building engineering and science projects in his parents’ and grand-parents’ garages. After graduating in electrical engineering and computer science from Princeton University, he started a rapid rise through the corporate world, moving from a New York start-up, Fitel, to Bankers Trust, where he became its youngest vice president. He then went to a Wall Street firm called DE Shaw & Co, where someone said of him: ‘he is going to make someone a lot of money one day’.

I don’t know how much he made them, but it was whilst he was there that he had the inspiration that would lead him to found Amazon.com. Amazon led the internet revolution in the late 1990s, rapidly overtaking its major competitors, the big US retailers, in turnover. It rode out the storm of the 2000 dot com bubble bursting, and went on to where it is now, taking on just about any big interests – most notably at the moment, the big publishers (about which both I and my publishers have a vested interest and I, for one, as an author and a reader, have complex and mixed views).

But Amazon is no longer just a book seller: it sells anything anyone wants to sell. It also manufactures handheld devices as part of its revolution in eBook selling, and has recently launched its first mobile phone. Bezos himself is now worth over $30 billion and uses his money to pursue his passion for space exploration, his belief in the long term future of the planet and, recently, in acquiring the Washington Post newspaper (2013).

All of the above is well-documented (indeed more fully documented) elsewhere. So why put Bezos into the Management Pocketblog? I think there is one really important lesson I want to draw from the often told foundation story of Amazon, which can be a vital lesson for managers everywhere. It comes in three parts:

We all come across interesting facts and curious statistics every day. It sometimes seems that this is what the internet is for (if it is not for cat photos or shopping at Amazon, that is). The difference with Bezos is that he took a statistic that millions were aware of and thought about it: In 1992, the internet was growing at 2,300 per cent per year. No matter how small the base was, this meant a huge potential and he saw it. And he also saw that this meant a potential for successful online commerce.

Bezos didn’t just go for what he knew, for what he liked, or for what seemed easy. He made a long list of every category he could sell and whittled it down to find the category with the greatest potential to make a breakthrough in online retail. Books had a lot going for them, he reasoned:

He then selected his base of operations a long way from where he was living (New York) or his family (Texas and New Mexico) because it was right for the business. Seattle offered:

Amazon has never rested and the driving force for that has been Bezos. It has innovated in: 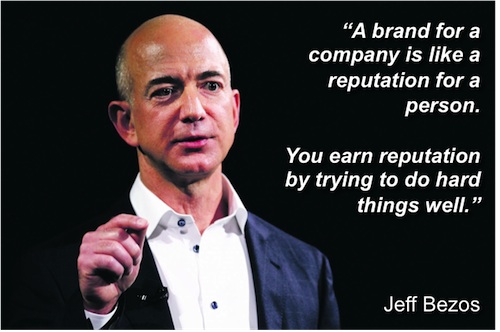 What could you achieve with a fraction of Bezos’: