I have already declared my interest as a fan of Edward de Bono in the 2012 blog: The Fertile Mind of Edward de Bono, which I followed up with Six times Four: More de Bono. Now it is time for a slightly wider survey of the work of the man who introduced the term ‘lateral thinking’ and who has been trying to teach business people, governments, student and their teachers to think for nearly half a century. 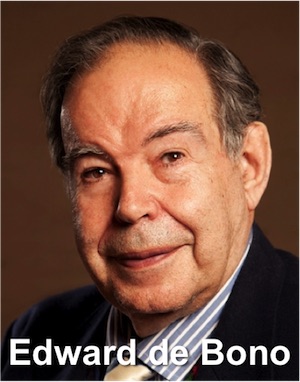 Edward de Bono was born in Malta in 1933, the second of four sons of a doctor father and journalist mother, and was an exceptionally bright pupil at his Malta boarding school. He was three years younger than his class-mates when he got his degree in medicine from Malta University and went off to study psychology and physiology at Oxford University as a Rhodes Scholar, where he also earned a DPhil in medicine. This was followed by slew of further degrees and academic appointments, that leave him, technically, Dr Dr Dr Dr (Dr) de Bono. I may have mis-counted and I have bracketed his first qualification as a medical doctor, as that was not an academic doctorate. I think we can conclude that Edward de Bono is both intelligent and academically motivated.

In 1967, he published the first of his popular books on thinking, the now out of print The Use of Lateral Thinking. This book introduced the world to his idea of ‘lateral thinking’ – a term that de Bono coined. His books now number around 60, of which the current most popular are:

I think this is where de Bono has clearly been at his best and least controversial. Many of his techniques and training programmes have provided business people, public service managers and other professionals with practical and helpful tools to enhance their critical thinking and creative thinking skills. Like any creative powerhouse, de Bono has produced easily as many ideas that have not gained widespread use as he has lasting ideas. But we should judge him on the latter.

This term is now so widely used that de Bono’s original meaning has been largely subsumed into the wider context of ‘creative thinking’. By ‘Lateral Thinking’, I believe de Bono originally meant perceiving the world in different ways, so that your thinking about a problem can pursue lateral branches, rather than following the main route that is obvious to it. It therefore means looking for new starting points for addressing a problem – an implicit assumption that existing patterns of thought rarely solve new problems effectively.

A central theme of a lot of de Bono’s books on creative thinking is the idea that provocative assertions stimulate lateral jumps in our thinking. De Bono crystallised this idea in his (now out of print) book Po: Beyond Yes and No. By analysing the provocation (or ‘Po’), we can reach new and possibly fruitful insights.

Another key theme of de Bono’s work, including Po, is that the dichotomies of yes versus no, or right versus wrong, or good versus bad, lead us into linear thinking that is poor at identifying new ideas or thinking in a rich and subtle way. Arguably de Bono’s single most powerful tool is PMI analysis, which can get you over that problem.

It takes its inspiration from Kurt Lewin’s force field analysis approach (which, incidentally, leads directly to SWOT Analysis). But instead of looking at the driving and restraining forces, or the strengths and weakness alone, PMI analysis asks us to look at the Pluses, the Minuses and the things that are Interesting about a situation, option or challenge. This third dimension opens your mind to the subtleties and to new ideas.

We covered this idea more fully in an earlier blog, but the essence of the concept is simple: that there are different ways to think and that we will solve problems more effectively and make more robust decisions, when we apply multiple modes of thinking, rather than a single, favourite style. The six thinking hats represent six modes: analytical, risk-averse, constructive, imaginative, emotional, and procedural thinking (white, black, yellow, green, red and blue hats respectively).

De Bono’s work is not without its critics – even his ‘mainstream’ contributions. Many cognitive scientists have critiqued the lack of evidence base for the efficacy of his methods and programmes – which matters deeply where the teaching of children is concerned, as for his CoRt programme. However, I am not qualified to assess these arguments. It does seem to me that there is a dichotomy here between the theoretical/academic assessment and the practical/utilitarian usage. His ideas as an addition to other training and teaching make a useful contribution to thinking skills for many people. There is plenty of testimony to support that assertion, even if the rigorous evidence base is lacking.

So, as with so much else in the world of management ideas, the proof is in the practical application: take de Bono’s ideas out for a test drive, and decide whether they are for you. If they help you: use them. If they do not: consign them to the bookshelf, and take them to the charity shop, next time you are passing. Maybe, if you donate one of de Bono’s books that I don’t own, I may well buy it!