So many of the management thinkers we have covered have superlatives attached to them and their achievements. The one most often applied to Adam Grant is youngest… youngest tenured professor and also most highly rated. But what comes out of the numerous interviews and assessments of him I read is ‘most generous’. For a man who has researched and written about the relative merits of giving and taking, he certainly lives up to his admonition to give more. 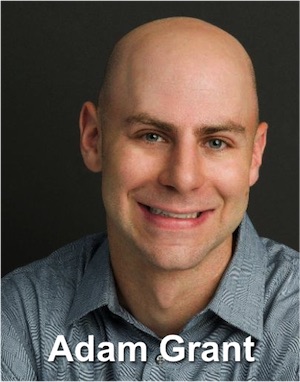 Adam Grant was born in 1981 and grew up in Detroit. He went to Harvard in 1999 to read for his Psychology degree and, while there, worked at Let’s Go publications, where he became a top seller of advertising and achieved promotion to director. However, his future lay in academia and so, following his graduation in 2003, he went to the University of Michigan to read for an MS and PhD in Organizational Psychology.

After a short spell as a postdoctoral visiting scholar at Britain’s University of Sheffield Institute of  Work Psychology, Grant took up his first academic post, at the University of North Carolina, in 2007. Two years later, he joined the Wharton School at the University of Pennsylvania, as an Associate professor, gaining tenure in 2011. He became a full Professor of Management and Psychology in 2013.

Grant has been showered with academic awards and plaudits, and his first book, Give and Take: Why Helping Others Drives Our Success, (2013) was a deserved bestseller. His new book, Originals: How Non-conformists Change the World, came out in early 2016.

The two things that comes out from profiles, are Grant’s energetic productivity and his genuine generosity. He gets masses done, moving at warp speed from one thing to the next, yet still finds time to respond generously to a huge number of requests for help from his students and others. He regularly responds to dozens of these emails a day, dispensing advice (informed by psychological research), linking people to contacts (he offers to do this for any of his students, who trawl his LinkedIn account for opportunities) and providing citation references for colleagues (who see him as encyclopaedic in breadth and faster than Google).

In this way, Grant is a role model of his (to date) most powerful idea. (I have not read Originals yet, as I am writing this prior to its publication). He has also served in a number of voluntary roles – currently as a Board Member of Sheryl Sandberg’s Lean In Foundation (Sandberg has written the foreword to Originals).

Give, Take, or Match

Grant’s research, documented in Give and Take, concerns ‘prosocial behaviour‘. This is behaviour motivated more by a desire to contribute than to serve ourselves. He divides people into three groups; those who:

Give
Givers enjoy contributing – whether it is ideas, help, mentoring, introductions, or advice. Givers typically achieve a lot or fail spectacularly, depending on the choices they make in giving. The successful givers, Grant believes, significantly out-compete takers and matchers, and the organisations they work for gain in measurable ways. Successful givers principally give high value help that has a low cost to themselves – what Grant terms: ‘five-minute favours’.

Take
Takers try to get as much as they can from others while contributing as little as they can get away with. They believe that the world – and work in particular – is a zero sum game, wherein if others win, they must necessarily lose. They are therefore focused on each individual interaction as an opportunity for short-term success. Grant posits that Takers will find it increasingly hard, as social media make it ever easier for society to punish them. In the past, this has been the function of gossip. Now gossip is global in reach, open in visibility, and potentially indelible.

Match
Matchers seek to create an even balance of give and take. Theirs is a fair world, but with less initiation of generosity, so therefore less reciprocation and hence less opportunity for real growth in the prosocial economy.

Grant’s interest in motivation leads him to conclude that we are motivated by the opportunity to help others and that, by giving people more opportunities to do this, or by framing their work in this way, we increase overall motivation and therefore productivity. His book and research papers cite many examples of this.

The takeaway, therefore, is clear: it really is better to give than to receive!

The Power of Powerless Communication