Roy Baumeister is one of the most widely cited psychologists. His research interests are broad and range across much of social psychology, leading him to be able to take a multi-disciplinary and synthesising approach to understanding large and important psychological questions. Yet he  also engages in careful and detailed experiments. 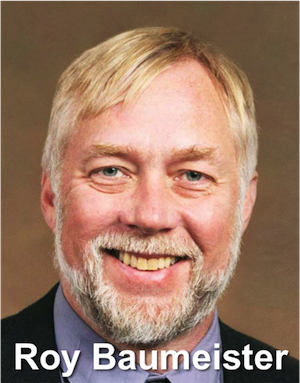 Roy Baumeister was born in 1953, in Cleveland Ohio. He describes his upbringing as ‘a series of lucky accidents that helped bring me to a calling perfectly suited to me’. And he describes his parents as ‘harsh, strict, dogmatic, Nixon-worshiping immigrants who plodded grimly and dutifully through life [who] clung to each other and feuded with the rest of the world … and insisted on unquestioning obedience and allegiance to their theories about everything.’

As a result, Baumeister has no allegiance to any point of view and is therefore able to change his mind, as he learns of new evidence. This makes him an ideal scientist, and well placed to revise long-cherished social and psychological theories.

He gained his Bachelors degree from Princeton, switching from Maths after two semesters to Psychology – a compromise between maths (which his father favoured) and philosophy (which Baumeister was drawn to). He did an MA at Duke, before returning to Princeton for a PhD, that was awarded in 1978. After a one-year post-doctoral fellowship in sociology and University of California, Berkeley, he took a teaching post at Case Western University in 1979. There he remained until 2003, becoming a full professor in 1992. He then moved to his present appointment, as Francis Eppes Professor of Psychology at Florida State University.

Baumeister rapidly realised that scholarly review articles would give him the opportunity to survey large amounts of literature and answer larger questions than individual experiments could tackle. Consequently, his wide research interests and his big-picture approach have led to him producing a lot of important thinking over the last 35 years. This has resulted in a vast array of academic citations, around 30 scholarly book publications and a huge following of academic researchers who rate the impact of his work extremely highly.

Among the topics Baumeister has tackled are:

Among these are some topics that are of particular interest to us, with a focus on management.

Free Will and Self-defeating Behaviours

Of course, free will has fascinated philosophers for centuries, and now neuro-scientists are highly engaged in the debate. Baumeister’s contribution is to define it in psychological terms, as being made up of four components:

He argues that exerting free will results in three things: control of our actions, socially-directed choices, and enlightened self-interest (choices that define our self-interest in the wider context of our social groups and broader society). Free will does, however, sometimes lead to self-defeating behaviours.

Some have argued that certain people have a self-destructive urge that powers these kinds of behaviours. But Baumeister’s research rejects this hypothesis. What he finds is that apparently self-defeating behaviours are the result of trade-offs we make, unexpected consequences, or at most, an attempt to escape from our perception of who we are (linking back to his interest in identity).

His most significant contribution to date is the concept of ‘Ego Depletion’ and the two related ideas that:

Baumeister coined the term ego depletion as a deliberate description of an effect that was first observed in a simple experiment. People had bowls of chocolate cookies and radishes placed before them and were told which they could eat. Those who were allocated the radishes were disappointed and showed desire for the ‘lost’ cookies.

In a subsequent test, Baumeister and his colleagues found that those who had had the radishes were far less persistent in solving puzzles than the group who had got the cookies and than a control group who had not been shown the choices. The conclusion is that the ability to exert conscious control (a function of what Freud called the ‘ego’) was depleted among those who had been forced to do so earlier. Baumeister was heavily influenced by Freud’s approach early in his career.

Your willpower, Baumeister says, starts the day at a peak, after a restful night, but diminishes through the day, as you use it up. (Toddler bedtime?) It needs recharging with food and rest. Indeed, his subsequent research has implicated blood glucose levels as a part of the physical mechanism, so the battery metaphor is highly apt.

More recent work also finds that if we practise willpower, our ability to deploy it grows stronger. The technique is regular practice at deliberately overriding your habitual ways of doing things and exerting conscious control over your actions. It is also worth noting research (including that of Angela Duckworth) shows that levels of willpower are highly indicative of lifetime satisfaction, wellbeing and success.

Whilst Baumeister is an accomplished academic author, he chose (wisely, I think) to team up with experienced journalist John Tierney to write about willpower. The resulting book, Willpower: Why Self-Control is The Secret to Success, is an excellent addition to any library: insightful, thought-provoking and easy to read. It is in a class with books by authors like Ariely, Thaler, Csikszentmihalyi, and Kahneman, and therefore one that scores exceptionally high on my ‘marginal notes and post-its scale’.