The scale of the organisation that Mary Kay Ash built is impressive. Wanting to test some of the wild figures I found on the the web, I went to the Mary Kay website for their own facts… and found the biggest number yet. But we have to treat that as authoritative. In their words: ‘3.5 million people worldwide are Mary Kay Independent Beauty Consultants.’ Wholesale (not retail) sales are $4 billion per year*. 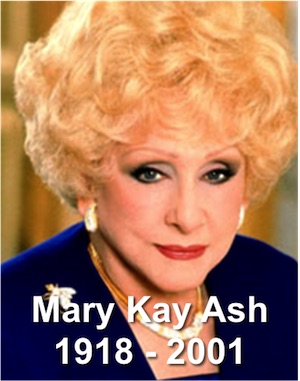 Mary Kathlyn Wagner was born in 1918, and grew up in Houston, Texas, graduating high school in 1934. She married a year later, and worked to keep her young family during the war. Shortly after her husband returned, they divorced.

Ash became a salesperson for direct sales business, Stanley Home Products. She hosted parties to encourage people to buy household items. She was good at it and, in 1952, was hired by another direct sales company, World Gifts. There, she spent just over a decade at the company, before she finally quit  – or ‘retired’, as she described it – after watching yet another man whom she had trained get promoted above her and earn a far higher salary.

Ash decided to write a book for women in the male-dominated business world.  The mythology here is lovely: she sat down and made two lists on a yellow legal pad.  One list had things that the companies she had worked for had done right. The other had the things she thought they could have done better.  Looking at the lists, she realized that she had inadvertently created a marketing plan for a ‘dream company’. This was one that could give women every opportunity to achieve personal and financial success.

So, with a small investment from her savings, and hep from her younger son, she formed Mary Kay Cosmetics, in 1963 (AVGY), just months after the early death of her second husband. She opened her first store in Dallas.

The business was profitable in its first year and made nearly $1 million in revenue in the second year. As with her previous experience (do what you know is a feature of many successful entrepreneurs) she sold her cosmetics at home parties and other events. Sales representatives – termed consultants – bought the products from Mary Kay at wholesale prices and then sold them to their customers at retail prices. They also earned commissions from recruiting new consultants.

However, she innovated in the way she organised her sales representatives and, notably, in the way she treated them. Her incentive programs and avoidance of traditional ‘sales territories’ were consistent with her fundamental belief in the ‘golden rule’: treat others as you want to be treated yourself. She also applied the motto: ‘God first, family second and career third’ and emphasised the importance of a healthy balance between work and home life, making her business a highly attractive place to work for women.

Ash wrote a number of books, from which we can learn much about her people-centred philosophy on business.

Her business went from strength to strength, earning itself and Ash (who married Mel Ash, in 1966) numerous awards and honours. She remained active in Mary Kay Cosmetics until suffering a stroke in 1996. Mary Kay Ash died in 2001.

What Mary Kay Taught us

Her books provide a wealth of wisdom about respecting and engaging the people who work for you. It’s easy to think of her aphorisms as easy cliches. The reality is that there is nothing easy about doing the basics well and consistently. Ash did exactly that.

Let’s consider some of my favourite lessons:

* Facts retrieved from http://www.marykay.com/en-US/About-Mary-Kay/CompanyFounder/Pages/Company-Quick-Facts.aspx on 22/12/2015.

There’s no getting around it, so all you can do is to embrace it, and engage with your resisters.  But how can you do so positively, and increase your chances of a successful transition?

That’s the reason I developed my Onion Model of Resistance, which I started working on back in the 1990s.  It helps us to understand the nature of the resistance we encounter and leads us towards effective strategies.

There are five layers of resistance that we encounter and they are summarised in the image below. (click to enlarge) 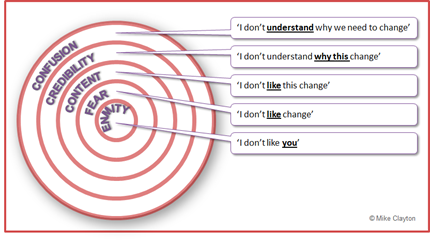 What we find is that, as we uncover a layer of resistance, there is often another layer beneath it.  Each layer is psychologically deeper, it is emotionally hotter, and it is harder to deal with.

Harmonious Engagement with the Resistance

My Golden Rule for Handling Resistance is:

‘I will always respect my resisters’

This means I need to use a harmonious approach that does not clash with them nor seek to put them down.  Our instinctive approaches, to blame, bully, plead, fight, do deals or lie, do not work – or, if they do, are not sustainable.  In my talk – and in the book – I listed a dozen or so techniques, inspired by the principles of Aikido, a Japanese martial art, sometimes called the ‘way of peace’, or ’the way of harmony’.

The talk ended with three things to remember:

The Onion Model, how to handle resistance to ideas, to sales, and to change, along with a host of tips are all in the Handling Resistance Pocketbook.

For more on the Onion Model…

…take a look at this earlier blog, on Handling Sales Objections. 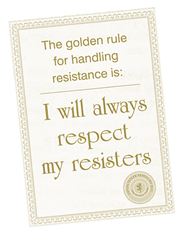