While to the general public, The Art of the Deal may be the best known book on negotiation, to anyone who needs negotiation to be a sustainable part of your professional toolkit, the first and best book to start with has to be ‘Getting to Yes‘ by Roger Fisher and William Ury. Indeed, for any manager or professional, this has to be one of the dozen most important books you can read.

Negotiation is conflict conducted in a civilised manner. And what Fisher and Ury tell us is that you are always going to be more successful if you carry it out with strong moral principles. They set out four powerful principles. But it is, perhaps, their solution to one of the biggest problems that negotiators face, which is their biggest contribution to doing a good deal.

Roger Fisher was born in 1922, and graduated from Harvard College in 1943, just before the United States entered the War. Fisher flew meteorological reconnaissance planes and returned to civilian life to complete a law degree at Harvard.

He then spent some time in Paris working on the European post-war recovery Marshall Plan, before returning to the States to join a Washington law firm. There he had the chance to present cases to the Supreme Court.

In 1958, he returned to Harvard Law School as a member of faculty, being appointed professor in 1960. There, Fisher became increasingly interested in how people resolve disputes, having lost too many friends during the War. So, in 1979, he and Ury co-founded the Harvard Negotiation Project.

Fisher spent a lot of time working on some of the biggest negotiations in global politics, including the Camp David summit between Israel and Egypt, and in South Africa, as Apartheid was finally ending. When not travelling, mediating and advising, he continued to teach, both at Harvard and many other prestigious institutions, as well as writing articles and books. In 1984, he founded the Conflict Management Group, which later merged with the Mercy Corps.

In 1992, Fisher formally retired as Professor and became an emeritus professor, continuing to teach and write into his 80s. Roger Fisher died in 2012.

William Ury was born in 1953. He studied Social Anthropology at Yale and went on to research his PhD at Harvard. In 1997, Fisher happened to read Ury’s research paper on the Middle East peace negotiations, and was impressed. He sent a copy to the US Assistant Secretary of State leading the negotiations, and invited Ury to work with him. They were to have a long and fruitful working relationship.

Working together in the Harvard Negotiation Project that they co-founded allowed the two to help each other develop their thinking and the 1981 book, ‘Getting to Yes‘ encapsulated their thinking at the time. It rapidly became a best-seller and remains so today. Both have written numerous additional books since.

Ury set up the Nuclear Negotiation Project in 1982 and also worked as a mediator and negotiation advisor alongside his teaching. In 2007, he also founded Abraham’s Path, to start on the journey of lasting Middle East peace. You can hear him speak about it at TEDx below.

In ‘Getting to Yes‘, Fisher and Ury set out two overarching beliefs for Principled Negotiating:

They also set out four essential principles that make negotiations as effective as possible; especially when both parties adhere to them:

Perhaps the best known concept from the book is the idea of a BATNA – the Best Alternative To a Negotiated Agreement. If you aren’t able to reach agreement through the negotiation you are in now, what is the best alternative available to you?

If you cannot reach a deal in your negotiation that is better than your BATNA, then any deal you agree to represents an incremental loss. So you should, at that point, walk away.

Another great tool Fisher and Ury offer in ‘Getting to Yes‘ is the Circle Chart. We wrote about it in an earlier Pocketblog.

Another earlier Pocketblog article about negotiation is Deborah Kolb: Shadow Negotiation. Kolb is a collaborator of Ury’s, at Harvard Law School’s Project on Negotiation.

In this talk, called The Walk from ‘No’ to ‘Yes’, William Ury offers a way to create agreement in even the most difficult situations.

This has been a great year for the Pocketblog, seeing reading figures rise substantially and reaching the milestone of our 100th blog posting.

So, with Christmas coming at the end of the week, let’s do a round-up of some personal favourites from among this year’s Pocketblogs.

Here is something for each of the twelve days.  Enjoy!

1. Start as you mean to go on: Happiness

After some New Year’s Resolutions to start the year off, we dived into the subject of Happiness, with ‘Happiness – as simple as ABC?’ about Albert Ellis’s Rational Emotive Behavior Therapy – the fore-runner of CBT.

We then moved into a subject that was much in the news in February; and still is.  With ‘Bankers’ Bonuses and Brain Biology’, we looked at recent neuroscience and how that relates to Adams’ Equity Theory.

In February too, I wrote two blogs about sociological ‘Generations X, Y & Z’ and ‘Generation Y at work’.  I followed this up by another about what comes ‘After Generation Y?’.

In May, inspiration waned for a week, so where did I go to find it?  ‘The Gemba’.  I got it back, and later that month, got idealistic in ‘Reciprocity and Expectation’ looking at the Pay it Forward ideal and the realities of Game Theory.

In the first of two blogs on how to predict human behaviour, I looked at ‘How to Understand your Toddler’ (mine actually) and Icek Ajzen’s Theory of Planned Behaviour.  Later in the year, in ‘Predicting Behaviour’, I looked at whether a simple equation (hypothesised by Kurt Lewin) could predict all behaviour.

6. One of the Best Business Books of the Year

… according to the Journal Strategy & Business is Richard Rumelt’s Good Strategy/Bad Strategy: The difference and why it matters.  In ‘What Makes a Good Business Strategy’ we looked at some of his ideas.

Has any one individual been as influential in establishing management as a pragmatic academic discipline as Peter Drucker?  To recognise his various achievements, I wrote a triptych of blogs over the summer:

And one of Drucker’s direct contemporaries was W Edwards Deming, so I also took a look at ‘Demings’ System of Profound Knowledge’.

Will history look on Tom Peters with the respect that it holds for Drucker and Deming?  Who knows?  But without a doubt, Peters has been influential, insightful and provocative for thirty years or more, and I am sure many of his ideas will survive.  In ‘Crazy Times Again’, I drew a line from FW Taylor (father of ‘Scientific Management’) to Peters.

In ‘Going Round in Circles’ I returned to management models and one of my all time favourites: Fisher and Ury’s Circle Chart. I applied it to problem solving rather than, as they did, to negotiation.

Fisher and Ury are experts on conflict resolution, as is Morton Deutsch. In ‘Conflict: As simple as AEIOU’, I looked at a fabulously simple conflict resolution model that originated in Deutsch’s International Centre for Cooperation and Conflict Resolution.

Two notable events made the autumn memorable for Pocketblog: one sad and one happy.

12. And finally, our most popular topic

Tuckman’s model for group formation has proved to be our most popular topic by far this year.  We have returned to it three times, each time looking at a particular facet:

From all at Management Pocketbooks,
our colleagues at Teacher’s Pocketbooks too,
and from me particularly.

There are some business books I refer to again and again.  Often they are also (no coincidence) those that are recommended by many people I know as part of your essential business bookshelf.

For general negotiating skills, I am yet to be persuaded that any book has overtaken ‘Getting to Yes’ by Roger Fisher and William Ury.  It is one of those books where ideas are densely packed and none are laboured.  So despite being a short book, it has more in it than many twice its size.

The lowest review on Amazon UK gives it 3 stars – saying there’s not much new in it.  A triumph for a book that is 30 years old and has therefore been imitated and borrowed from heavily over the years.  I am fairly sure it was Ury and Fisher who first introduced negotiators to the BATNA.

However, I am not writing this Pocketblog about negotiation and you can learn more in Patrick Forsyth’s excellent Negotiator’s Pocketbook (one of my personal favourites).

Sitting among the many gems in Getting to Yes (at page 70 of my 1986 hardback edition) is the circle chart.  This is presented as a tool to help negotiators ‘invent options for mutual gain’.  I see it as one of the best generic problem solving tools – and also, by the way, as a pretty good model for the consulting process. 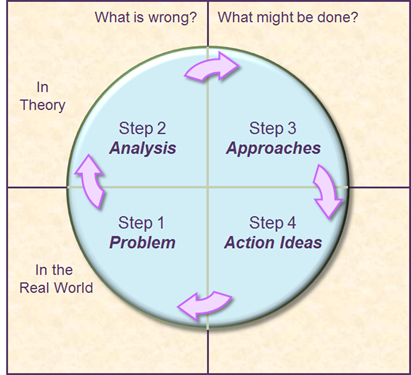 What a wonderfully simple model for problem solving this is.

All things are connected…

‘It’s the circle of life, Simba’

The Circle Chart has always reminded me how simplicity and robustness come from a few great insights, and the model-maker’s skill is in presenting them in new and relevant ways.  In particular, this model is a close relative of another, designed for a very different purpose: Bernice McCarthy’s 4MAT method for instructional design.

Although the sequence is slightly different, the four questions that McCarthy argued that we need to answer are all here:

The circle chart may not be the most sophisticated problem solving model available, but it covers all of the basis for me.  A great resource for managers, project teams, consultants and trainers.