Fiona Reynolds may have little profile internationally. She may even be little known in her home country of the United Kingdom. But her contribution has been hugely valuable and her approach to change offers a simple lesson we can all learn from. 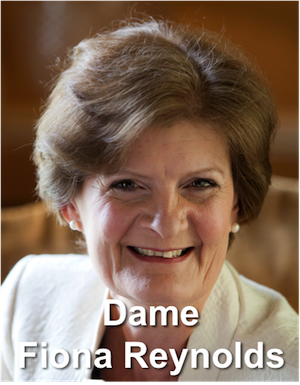 Fiona Reynolds was born in Cumbria, in the North West of England, in 1958. She studied Geography and Land Economy at Cambridge University, graduating in 1979. She then took an MPhil in Land Economy, before taking her first job at the Council for National Parks. This is an umbrella organisation for a range of campaigning conservation organisations and amenity-holding organisations (now called Campaign for National Parks). She rose to Secretary to the Council, before moving, in 1987 to The Campaign to Protect Rural England, where she remained until 1998.

It was, perhaps, a surprising move, when Reynolds left the conservation sector and joined the UK Cabinet Office (serving Government) in 1998. There she took the role of Director of the Women’s Unit. Of her time as a senior Civil Servant, Reynolds say she found it frustrating. But she did learn how to make things happen without authority, by working with and around people. This was to serve her well in her next – and most important – role. She was honoured with a CBE for services to conservation, in 1998.

In 2001, Reynolds took up the post of Director General of The National Trust, where she stayed until 2012. She felt she had been brought in to make changes and indeed she did. At the end of her tenure, in 2012, she handed over a very different organisation to her successor. In 2008, she was awarded a DCBE and became a Dame.

In 2012, she became the Master of Emmanuel College, Cambridge – one of the oldest educational institutions in the UK, some of whose alumni founded Harvard University. Around the same time, she also accepted a number of non-executive directorships including Wessex Water and, most notably, the BBC. In 2014, she became Chair of the Green Alliance, and in 2015, became Chair of the Cathedrals Fabric Commission for England.

When Fiona Reynolds took over as Director General of the National Trust, it was a much loved institution that felt like a club for those who loved it most. For the majority of visitors, the experience of visiting one of its buildings was very much of their being privileged to be allowed in. There was a sense that the Trust tried to hold its assets in a vacuum and visitors were, at best, a necessary source of funds and often, were seen as a distraction and a nuisance.

But the Trust’s role is to hold its land and property assets in Trust for future generations – and our own. Reynolds set about reforming the Trust to create more visitor friendly and engaging experiences. She sought to involve families with ‘open arms conservation’. She restructured the Board, allocated funds for developing renewable energy sources, and placed children at the heart of visitor experiences. Easter egg hunts, Santa trails, craft and dressing up all came to the Trusts properties, and so, increasingly, did visitors.

At the heart of her conservation philosophy was localism, so the cafes and restaurants at attractions featured local produce, and more of this was grown on the properties’ own land and in their gardens. The Trust is now a thriving institution with full car parks for many weekends, and a real influence over Government policy, that comes from over 4 million members (membership almost doubled during Reynolds’ tenure).

Reynolds has said little publicly about how she led the changes at the National Trust. However, what seems clear is that she did so by recognising that people and conservation are mutually interdependent. She is a gregarious person, who has become comfortable and adept at persuasion and negotiation, as well as deploying strong, evidence-based arguments.

While her role as Master of Emmanuel is not explicitly as a change agent, this ancient institution needs to continue to change, as it has done for hundreds of years. And it seems that Reynolds is an ideal person to lead this. Her management style looks simple, but never confuse simple for easy. She simply likes people and enjoys working with them. And if you want to understand how to make change happen, there is little more you really need.