Cynthia Scott and Dennis Jaffe developed the model that often bears their names, as consultants, in the 1980s. Their Change Grid is one of the most widely used models to explain and anticipate how people will respond to organisational change. They published it in Training and Development Journal in April 1988. The article was called Survive and Thrive in Times of Change.

Cynthia Scott had a varied academic career, studying Anthropology, then Health Education and Administration, before gaining a PhD in Psychology from The Fielding Institute, in 1983. From there she became a co-founder (along with Dennis Jaffe) of ChangeWorks Global, in 1983. She remained there until 2001.

Scott’s career remained in the private sector in a wide range of consulting roles, with academic appointments running alongside. Today, she leads ChangeWorksLab, a change management consultancy that she founded, and is a professor at the Presidio Graduate School.

Scott has written 14 books. Five were with Dennis Jaffe, all of which are out of print and available only as used copies.

Dennis Jaffe likewise studied various subjects: philosophy, management and (for his PhD in 1973) sociology – all at Yale. In 1980 he joined Saybrook University as professor of Organizational Systems and Psychology. He remains an emeritus professor there.

He co-founded ChangeWorks Global with Scott, and now specialises in matters relating to family businesses: governance, relationships, and leadership. He also consults with the financial advisors who serve those businesses.

Jaffe has written a large number of books. Five were with Cynthia Scott, all of them out of print and available only as used copies.

Their model owes much to the work of Elisabeth Kübler-Ross, who had researched the way people deal with tragedy, bereavement and grief. Her five-stage grief model is widely used:

Our evolution did not take place among shifting organisational structures and operational processes. The changes our ancestors encountered were often life threatening.  So the responses that Dr Kübler-Ross described served them well.

Scott and Jaffe’s model describes a progression through four stages.

Denial
Initially, the meaning of the change fails to sink in: we act as if nothing has happened.

Resistance
Once we start to recognise that change will happen, we start to Resist it.  We do this at an emotional level; we show anger, anxiety, bitterness or fear, for example. But we also oppose the change rationally, and often take active steps to frustrate it.  Organisations tend to see increases in sickness, absenteeism, and turnover, along with more general drops in efficiency and quality.

Exploration
When the organisation faces up to the inevitable resistance, and engages with it in a positive way, then people can start to focus on their future.  They will Explore the implications of the change for them, and look for ways to move forward.  This can be a chaotic time. But it can also be exhilarating for the change leaders. This is especially so when the benefits of the change are significant.

Commitment
Eventually people start to turn their attention outward as they Commit to their new future.

I have used my own variant on this model, and found it powerful as a predictor of change.  Like all models, it is not ‘true’.  Yet it does offer us valuable insights. When we use it with care, these insights can enhance the process of facilitating change. 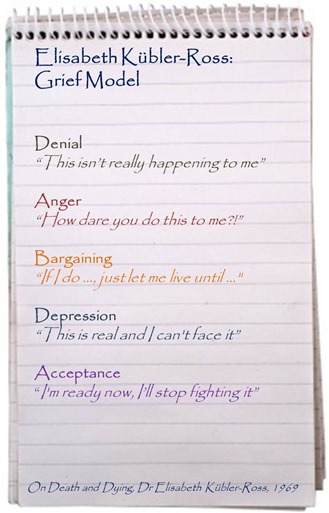 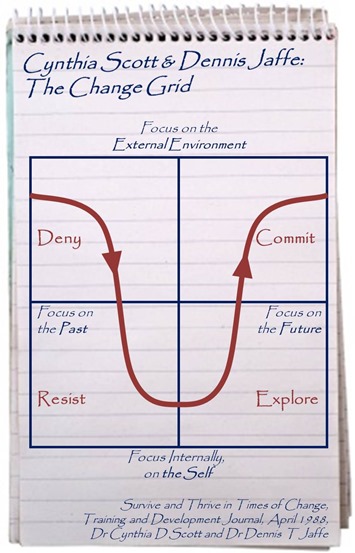