We tend to think of leading management theorists as coming from the United States. This seems especially so of Scientific Management. But when the privilege of naming things for the world’s largest audience goes to those who write in English, history creates a bias. And because that audience largely reads only one language, that bias gets amplified.

One of many losers from the Anglo-centric nature of management and business thinking was Karol Adamiecki. He was a Polish engineer, turned economist and management thinker, who can claim to have invented the Gantt Chart before Henry Gantt, PERT before the US Navy, the Theory of Constraints before Eliyahu Goldratt, and much of Scientific Management before FW Taylor.

Karol Adamiecki was born in southern Poland, in 1866. He studied engineering at the Institute of Technology in St Petersburg, graduating in 1891. He then returned to his home town, where he took charge of a steel mill. He stayed for nearly 30 years, during which time, he formed his ideas about management.

In 1919, he left the mill, and became a lecturer at the Warsaw Polytechnic, becoming a professor in 1922. There, he further codified and published his ideas. In 1925, he founded the Institute of Scientific Management in Warsaw, becoming its Director and remaining until his death in 1933.

Adamiecki’s  Law of Harmony in Management

While running the steel rolling mill, Karol Adamiecki developed sophisticated thinking around management that was, from our perspective, ahead of its time. The three principal components were:

Adamiecki started to publish in 1898, several years before Taylor did so.

In 1896, Adamiecki solved the problem of sequencing and scheduling in production and published, in1903, his solution. He called it a Harmonograf. And it looks very much like what we now call a Gantt Chart. However, Henry Gantt did not publish until 1910. There is no evidence to suggest Gantt copied Adamiecki’s idea.

In constructing the Harmonograf, however, Adamiecki describes a process that is pretty similar to the PERT and CPM methods. He certainly is able to include critical path and float. These are two concepts Gantt did not consider at all.

As Adamiecki described his methods, he was able to optimise production schedules by sliding paper tabs and arranging paper strips. In a very real sense, he developed an analog scheduling computer.

Without a doubt, Adamiecki’s thinking was of its time, but way ahead of its rediscovery. He possibly failed to realise just how valuable it was. But more likely, he simply suffered from an Anglophone bias in scholarship and manufacturing. Publishing in Polish simply did not get him recognition far beyond the borders of his home country. Even now, it is only in the Karol Adamiecki University of Economics in Katowice, that his name is celebrated.

And I have to ask, could this happen again? Yes. I think it can, will and probably is happening now. Last week, we met Vlatka Hlupic. Arguably, her work is known despite her Croatian origin, because she lives and works in London. With the US and the UK increasingly looking to close their borders for differing but related reasons, the next Karol Adamiecki’s work could well lay undiscovered for just as long as that of the first. 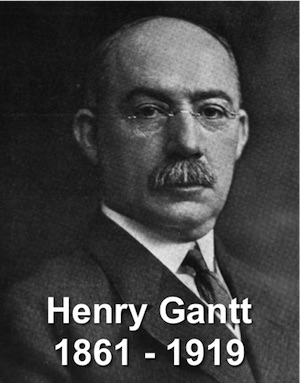