Hirotaka Takeuchi and Ikujiro Nonaka have featured in an earlier Pocketblog, which was focused on Nonaka and the work  he led on how knowledge can transform organisations.

Arguably, it is how Nonaka and Takeuchi took some of their thinking forward that has led to a far bigger transformation. In 1985, they co-wrote an article for the January 1986 edition of Harvard Business Review. Called ‘The New New Product Development Game’, this article was instrumental in revolutionising the discipline of Project Management.

Takeuchi and Nonaka gave us a new way of thinking about how to develop products and deliver projects. And they coined an evocative sporting metaphor for their process, which has stuck: Scrum.

Born in 1935, Ikujiro Nonaka gained a BS in political science at Waseda University, then started work at Fuji Electric, where he created their management programme. Nonaka left Fuji in 1967, to study at the University of California, Berkeley. He was awarded his MBA in 1968, and his PhD in Business Administration, in 1972. He took posts at US universities, before returning to Japan, as a professor at the Graduate School of International Corporate Strategy, Hitotsubashi University.

Born in 1946, Hirotaka Takeuchi got his BA from the International Christian University, Tokyo. After a short spell working at McCann-Erickson, he went to the University of California, Berkeley, where he got his MBA in 1971, and his PhD in 1977. During his time at Berkeley, he also worked summers for McKinsey & Company in Tokyo and, more important, met Nonaka.

Takeushi took a lectureship at Harvard in 1976 until 1983, when he joined Hitotsubashi University School of Commerce, where he became a full professor and Dean of the Graduate School of International Corporate Strategy. He stayed until 2010, when he returned to Harvard, as Professor of Management Practice, where he is now.

In January 1986, Harvard Business Review published ‘The New New Product Development Game‘ by Takeuchi and Nonaka. This was about a new way to do New Product Development, or NPD. They drew on the idea of ‘ba’ – a Japanese coinage of Nonaka’s, meaning a meeting place for minds and the energy that draws out knowledge and creates new ideas.

They also took a look at the Toyota idea of teams coming together to solve problems. They introduced a sporting metaphor from the game of Rugby; that of the scrum. They used scrum to denote the way teams work together intensively when the ball goes out of play. In a work environment that demands creativity and innovative problem solving, this is just what is needed.

They followed this article up with a 1995 book, ‘The Knowledge-Creating Company: How Japanese Companies Create the Dynamics of Innovation‘. This looks at the way Japan became a major economic power, especially in the automotive and electronics industries. they argue that Japanese firms are successful because they create new knowledge to produce successful products and technologies.

The model they created for Scrum Teams is of a cross functional group that can work autonomously to resolve its own problems. Their organisation is ’emergent’ meaning there is no assigned leadership or structure; it just emerges from the effective collaboration of its members.

To work best, a Scrum Team needs to be co-located, and work together full-time. This allows a high level of cross-fertilisation of ideas, and a dedication to working on their shared problems, tasks, and initiatives.

Agile project management seeks to avoid the all-or-nothing approach to projects that used to characterise traditional approaches – especially when done in a way that slavishly follows a set of ‘rules’. Although good project managers have always incorporated a lot of plan-do-review (the Deming Cycle), the growth of software development projects demanded an increase focus on agility and incrementalism.

This was the basis of the Agile movement and today the single most widely used Agile methodology takes its name and guiding principles from Takeuchi and Nonaka’s metaphor: Scrum.

In Scrum projects, a Product Owner is responsible for detailing the business requirements and ensuring that the business gets a good return on its product development investment (RoI). The Scrum Team, led by a Scrum Master, selects one subset of functionality from a product backlog of undeveloped functions, divides it into tasks, and works intensively on developing the outputs for a fixed time, known as a Sprint, which is usually 30 days.

Each day, the team gets together for a daily Scrum Meeting to share learning, report progress, discuss challenges, and solve problems. At the end of the sprint, the team should produce a working product that is stable and useful. After a reflection and learning process, the team then works with the product owner to define the subset of functionality it will work on in the next sprint.

The team continues like this until the Product Owner concludes that the next sprint would not create enough additional value to justify the incremental cost.

Ikujiro Nonaka has been described by a long-term colleague and collaborator as the ‘Father of Knowledge Management’. He takes a radical view – in the true sense of radical: he goes to the route of how we acquire, create and share knowledge. 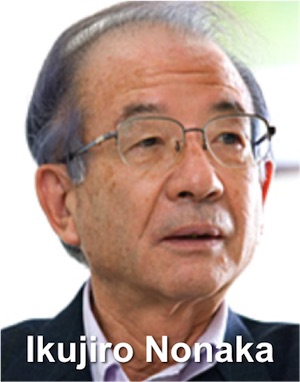 Ikujiro Nonaka was born in 1935 and grew up in Tokyo. He studied political science at Waseda University, gaining his BS in 1958. He started work that year at Fuji Electric, where his principal accomplishment was to create their management programme. He went on to further develop this, in alliance with Keio University.

Nonaka left Fuji in 1967, to study in the United States, at the University of California, Berkeley. He was awarded his MBA in 1968, and his PhD in Business Administration, in 1972. He took posts at US universities (Claremont Graduate University and then the Haas Business School at UC Berkeley), before returning to Japan, as a professor at the Graduate School of International Corporate Strategy, Hitotsubashi University.

There he collaborated with another staff member, whom he had known as a grad student at Berkeley, Hirotaka Takeuchi. It was the latter who describes Nonaka as the ‘Father of Knowledge Management’.

Together, Nonaka and Takeuchi have written numerous articles, and the highly influential 1995 book, The Knowledge-Creating Company: How Japanese Companies Create the Dynamics of Innovation. Two of their Harvard Business Review articles have been particularly influential:

At the heart of Nonaka’s thinking is the rejection of the common view of Knowledge Management as fundamentally an IT function. The data management part of knowledge management is a minor – indeed, incidental – component. The fundamental part is the creation and sharing of knowledge, which takes place via the relationships between people.

He therefore asserts that spending tens, or hundreds of thousands of dollars on technology systems misses this essential truth and argues that true knowledge creating companies are ones with a generous community feel.

‘Ba’ is a word Nonaka coined to mean a meeting place for minds. Whilst it can be a physical space within the organisation, Nonaka sees it more as a mental state, where people are able to share and create knowledge together. He likens the concept to that of ‘flow‘ – in the sense that both are states of total focus and immersion. However, unlike flow, Ba is a shared mental state.

Nonaka and Takeuchi’s most notable contribution is their SECI Model of how knowledge transforms in organisations. Regular readers of Pocketblog will know just how much we love models, so here goes.

The SECI Model is a representation of the dynamic way that knowledge flows from explicit to implicit and back. It sets out to unite the Western preference for Explicit knowledge (‘Know why’ or, to use the ancient Greek term, ‘episteme’) and the Japanese focus on tacit knowledge (‘know how’, or ‘techne’).

Nonaka and Takeuchi start their cycle with social knowledge sharing to build tacit knowledge and move around to internalization of explicit knowledge to make it implicit, or tacit. They then see that knowledge being shared, restarting the cycle (they originally drew it as a continuous spiral, but I prefer the loop metaphor). At each stage, knowledge is converted, and made more useful.

In his latest work, Nonaka draws the ancient Greek analogies of episteme and techne, and highlights a third sort of wisdom that the ancients cherished: ‘phronesis’, or ‘practical wisdom’. He describes phronesis as the wisdom to know what must be done – judgement, if you like. He sees this as the antidote to an overly rigid focus on theoretical know-why knowledge, or practical, know-how. In Aristotelian ethics, phronesis is usually seen as rational thinking and prudent judgement.

Nonaka thus connects up knowledge management with leadership.  Phroneis gives us a clearer understanding of how our organisation relates to the rest of the world: purpose, choices, actions. This can give the organisation a resilience that a less self-aware organisation will lack. Nonaka argues that phronetic leaders can foster improved judgement and decision-making by creating a culture of sharing, nurturing, and creating knowledge through informal social connections: ‘Ba’.

Nonaka in his Own Words