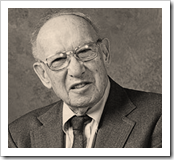 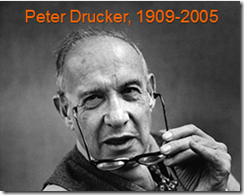 Peter F Drucker is a towering figure among management thinkers.

His thinking, consulting, teaching and writing won him many accolades and his ideas have become so mainstream, that some are considered to be purely ‘received wisdom’.

Drucker is also paradoxical in many way, and perhaps this is why his work is so good: it remains pleasingly simple, whilst it refuses to be simplistic.

Drucker is primarily known for his ideas about how individual managers can work best, but he made his first big mark studying a huge corporation, General Motors.  In 1942, he was invited into the company to study it and report on findings, by the Board.  His observations are captured in a business classic: ‘Concept of the Corporation’.  Ironically, the Board and its CEO, Alfred P Sloane repudiated just about all of Drucker’s findings.

Management as a Science or an Art

Drucker was influenced in his earliest thinking by ideas of ‘scientific management’, but rejected them as too rigid.  Instead, he saw management as an art – and continued to do so for all of his life.  People who met him often commented on his erudition and love of the liberal arts – he was foremost a thinker and intellectual, and a management thinker second.  It was his rejection of scientific approaches to management that caused GM to reject his findings and, many years later, in 1956, Sloane’s own book, ‘My Years with General Motors’ provided a riposte to Drucker’s.

As the 1950s began, there was almost nothing written explicitly about the practice of management: what a manager should do, day-to-day, to manage. That changed in 1954, when Drucker wrote ‘The Practice of Management.’  Drucker claimed, in 1982, that, with this book, he had invented management.  Perhaps this was hyperbole, but it is fair to suggest that he did invent the management book.  Arguably, without Drucker, no Management Pocketbooks.

To the response, without Drucker, someone else would have come along, the only answer is to acknowledge the truth of this but note that we still revere other innovators like Newton, Darwin, Edison – even though each had competitors doing much the same, at around the same time.

What is in ‘The Practice of Management’?

Using case studies from organisations like IBM, Sears and Ford, Drucker lays out the basics of a fundamental management curriculum:

It is hard to believe that some of his themes are over 50 years old – they remain fresh and relevant today.  the need for managers to:

Drucker’s influence is huge: ‘The Practice of Management’ sets out for the first time, Management by Objectives, and not as a fluffy catch phrase, but as a robustly developed set of ideas and processes – perhaps his last nod to scientific management.  Since the 50’s he has been the originator of much business thinking that has endured, and predicting the rise of the knowledge worker (that’s me) as early as 1959.

Drucker gave his name to Claremont University’s business school, where he taught for thirty years.  The Drucker Institute’s website has a lot of biographical information about Peter Drucker, and a link to an interesting blog, the Drucker Exchange.

in our companion articles:

Drucker’s work has infused so much management thinking, you’ll find it in many of our Pocketbooks.  Here are some you might like: