John Grinder and Richard Bandler are credited as the co-founders of NLP. This is a basket of behavioural, therapeutic, and influencing techniques that comes in and out of fashion in the organisational world.

However, in the self-help world, its ups and downs are less pronounced – it has continually received accolades and steadily grown its influence.

So here then is the central dilemma of NLP for managers and professionals: how important is it? And therefore, how seriously do we need to take Bandler, Grinder, and their ideas of NLP?

John Grinder was born in 1940, and studied psychology at the University of San Francisco. After graduating with a BA, he joined the US Army as a Captain in a special forces unit. He then joined a US intelligence agency, before studying for a PhD in linguistics at The University of California, San Diego.

Grinder completed his PhD in 1971, and after a short time in George Miller’s lab at Rockefeller University, he joined UC Santa Cruz as an Assistant Professor in Linguistics. His research interest was the then very new and fashionable transformational grammar pioneered by Noam Chomsky.

In 1972, a psychology student called Richard Bandler came knocking, looking for help with a research project in which he was transcribing hours of Gestalt Therapy sessions. Bandler wanted help in analysing Fritz Perls’ language.

This was the start of a collaboration that led to the founding of Neuro-Linguistic Programming. The story of their collaboration, and of the other people involved – it was far from a two-person endeavour – is well documented elsewhere. So too is the acrimonious breakdown of their working relationship, and the court actions over ownership of the NLP name and ‘brand’.

The upshot of this, by the way, is the court’s decision that NLP is a generic term and no one can own it. This meant that, after the split, Grinder could continue to develop his own new ideas, which he came to call ‘New Code’ NLP in contrast to the earlier work he did with Bandler, which he refers to as ‘Old Code’.

Grinder has authored many books with Bandler and others, and continues to teach NLP, through his own business (Quantum Leap) with his wife, and for other NLP schools.

Richard Bandler was born in 1950. His first few years were spent in New Jersey, before moving to California. He studied Philosophy and Psychology at US Santa Cruz, where he graduated in 1973.

There, Bandler met John Grinder and other early collaborators in developing what became NLP.

Bandler and Grinder became close colleagues studying and teaching the communication patterns of a number of therapists, like Fritz Perls, Virginia Satir, and Milton Erikson. They gathered a number of other interested researchers and teachers around them.

Inevitably, as what they were teaching became more popular – and therefore more commercial – tensions arose. Like Grinder, Bandler formed his own business and continued to teach and develop new ideas. He too still teaches NLP, along with hypnotherapy, around the world.

Bandler and Grinder were co-authors of a number of the seminal books in the emerging subject of NLP. None are aimed at ‘lay’ readers. They are written for aspiring and experienced practitioners and, even having studied NLP and received Practitioner and Master Practitioner certificates, I find them barely readable.

There are many more modern books aimed at introducing NLP to interested readers. Browse your favourite book site and take your pick.

So, what is NLP? It stands for Neuro-linguistic Programming (yeah, I know), and it is fundamentally an assorted bag of methods and models designed to help understand communication and behaviours and elicit behavioural change.

An earlier Pocketblog gave a Brief Introduction to NLP Skills.

At the root – and this is something Grinder constantly emphasises – is the idea of modelling. Whatever you want to be able to do, find an example of someone who does it to a level of excellence. Document everything they do, say, and think when they are doing it. Then try out being exactly like they are. Start to strip away elements, to find out what parts make no difference and which parts, when lost, become significant.

You’ll end up with a core of beliefs, behaviours, and communication patterns that materially affect your outcomes. Fritz Perls, Virginia Satir, and Milton Erikson were the first people extensively studied in that way.

From them, Bandler and Grinder extracted two of the biggest and most influential models within the NLP corpus: The Meta Model (from Satir and Perls) and The Milton Model (from Erikson).

The Meta Model documents language patterns that allow the therapist, coach, salesperson (choose your role) to spot patterns of thinking in the other person. A long list of linguistic patters betray distorted perceptions, generalisations, and subconscious deletions of possibly relevant information. By challenging these, coaches and therapists can open up new possibilities to the person they are helping, and salespeople can breakdown objections to buying.

Bandler and Grinder’s primary books that originally documented this were The Structure of Magic, volumes 1 and 2.

Milton Erikson was a masterful user of hypnosis in his therapy. Indeed, his style is sometimes called Eriksonian Hypnosis. Once again, Bandler and Grinder documented his language patterns. They found a similarity to the meta model, but that Erikson was being deliberately vague, to elicit gaps in thinking, through which he could insert therapeutic suggestions. The Milton model can help move a listener into a more receptive state. Again, this is useful to therapists, coaches and salespeople.

Bandler and Grinder’s primary books that originally documented this were Patterns of the Hypnotic Techniques of Milton H. Erickson, M.D. volumes 1 and 2.

NLP is like Marmite: it evokes love and hate reactions in broadly equal measure. And its popularity goes through peaks and troughs – big ones for business, smaller troughs for the self-help industry.  It is currently a multi-million dollar industry world-wide.

Three factors are perhaps responsible for the extreme views:

On the other hand, there are also three good reasons to learn more about NLP:

You can find much in NLP that is of value to you; and much that is not.  If you are prepared to be selective and evaluate each tool on its merits, NLP is a powerful resource.

Here’s a video I did for another business that will echo much of what’s here.

One of the commonest acronyms and buzz-phrases a manager will encounter is NLP, or Neuro Linguistic Programming.  What is it?

First off, ignore the name: we’ll come back to that later.  Focus on what it does.  NLP is a toolkit of resources that help us with improving our performance and general communication-related tasks like:

The toolkit was developed using the fundamental philosophy behind NLP, that:

‘Excellence can be modelled and reproduced’

Put simply, if you do something well, then if I do it exactly the way you do it, I will do it as well as you.  Clearly, this approach has applications in all areas of business, public service, management, sport… the list goes on.

A lot of the tools were therefore originally developed by observing excellent communicators and therapists, documenting what they did, testing and codifying the lessons and distillig their techniques down into a set of rules.  These form the body of NLP.  They include things like:

The Meta Model
A set of language constructions that we can recognise in other people’s speech, which give clues to the faults in their thinking (modelled from family therapist, Virginia Satir)

The Logical Levels Model
This model (described in an earlier Pocketblog, ‘I can’t do that now’) sets out different levels at which we perceive aspects of ourselves and the world.  It is useful in diagnosing problems and stimulating change.

Change Processes
NLP has its roots in Therapy.  So a lot of the tools are helpful in personal change and personal decision making.

The Modelling Process
How to elicit how excellence arises.  Use it to observe a great sales person, for example, to distil what they do and codify it into a sales process other team members can apply.

The meaning of your communication is the response you get 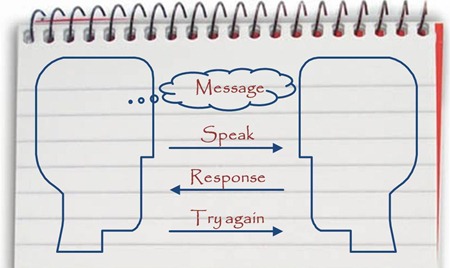 I suspect the name is as much an attempt to shroud the new (in the 1970s) methodology in a mystique and in academic language, as anything else.  Neuro, because it works with our best understanding of how the brain works.  Linguistic because language is the medium through which it operates and Programming, because it seeks to create new, more useful habits.