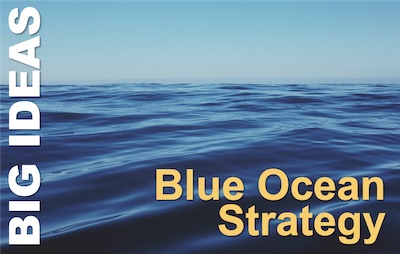 END_OF_DOCUMENT_TOKEN_TO_BE_REPLACED

So here are your primary strategic choices:

These two approaches have been championed by some of the greatest management thinkers and corporate leaders. W Chan Kim & Renée Mauborgne gave these strategies compelling names, and championed the latter in in a phenomenally high-selling book. They called it the Blue Ocean Strategy.

W Chan Kim was born in Korea, in 1952. After studying at the University of Michigan’s Ross Business School, he joined the faculty, becoming a professor. In 1992, he moved to the prestigious European Business School, INSEAD, in France, where he is The Boston Consulting Group Bruce D. Henderson Chair Professor of Strategy and International Management and Co-Director of the INSEAD Blue Ocean Strategy Institute.

Like Kim, Renée Mauborgne studied and taught at the University of Michigan Ross Business School. They moved together to INSEAD. Mauborgne is an American, born in 1963 (AVGY). The two have been long term collaborators, and their primary work together has been the research and writing about corporate strategy, which led to the concept and book, called Blue Ocean Strategy.

The 2004 HBR article, Blue Ocean Strategy, and the 2005 book of the same name are both best-sellers. The book’s sales are approaching 4 million. So clearly, if you’re a manager with any interest in business strategy, you need to know about this idea.

The concept is disarmingly simple.

A Blue Ocean Strategy sees a business finding a new market that is unexploited, and creating a market space for itself. Kim and Mauborgne’s metaphor is that Oceans represent market spaces.

They contrast new market spaces (blue oceans) with existing markets (red oceans). Companies that adopt a red ocean strategy focus on beating their competition and for this, an understanding of strategic concepts like Porter’s Five Forces will help.

The critique that Kim and Mauborgne level at red ocean strategies is that they often operate in crowded (or overcrowded) markets, offer limited opportunities for growth, and require lower profit margins. The bottom line impact of a red ocean strategy is, at best, conservative.

Instead of this ‘market-competing’ approach, they advocate a ‘market-creating’ strategy, which places an emphasis on ‘value innovation’. This strategy should see customer value increasing, while costs drop, because (in Porter’s terms) you are targeting differentiation, rather than cost leadership. Differentiate yourself, they say, by finding new demand that competitors cannot yet address, and meet it.

As you’d expect from two leading academics, Kim and Mauborgne have created a Blue Ocean Strategy Institute, which they co-direct, and built a suite of analytical tools for companies to draw down on.

Critique of the Blue Ocean Strategy

The first critique could equally be seen as an endorsement. Their idea is not new. Numerous business strategy thinkers have developed and published similar ideas, like Gary Hamel, C K Prahalad, Kenichi Ohmae, and even the venerable Igor Ansoff.

The second critique is harder for Kim and Mauborgne to shake. There is little or no empirical evidence that their strategy works, in the sense of creating lasting competitive advantage through its deliberate application.

Without a doubt, businesses have innovated throughout history, creating new markets from nowhere. And many of them have gone on to maintain dominant positions for many years. You cannot argue with the thesis that finding a Blue Ocean and quickly becoming the top predator there works. Their book is full of modern case studies.

But, who has read the book, decided to launch a blue ocean strategy, applied the tools, found some blue ocean, and created a dominant position?

The counter to this argument is: ‘it’s only been a few years’. But as time goes on, we are waiting for the evidence.

So, what is Blue Ocean Strategy?

Is it an innovative management theory that contains a deep new insight backed by rigorous research?

Or is it a brilliantly packaged re-casting of familiar and self-evident ideas, illustrated by a number of compelling case studies?

I leave you to judge.