In the  1950s, a revolution was underway in management thinking. Classical ‘scientific’ management theory had been discarded by the humanists, and now a new generation of researchers were challenging humanistic approaches.

Their conclusions led to ‘contingency theory’ – the idea that the best approach to management is contingent on the situation. Among them, working from the southern English backwater of SE Essex Technical College was a forgotten leader in the field of management studies: Joan Woodward. 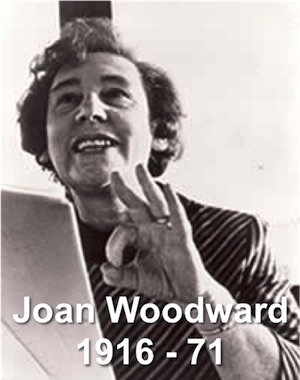 Joan Woodward was born in 1916. She was originally a classicist, but changed direction and got her first academic post in the Department  of Social Sciences, at Liverpool University, where she worked from 1948-1953. There she started her work in industrial relations, which she expanded when she moved to South East Essex Technical College (now part of the University of East London).

It was here that Woodward did her most significant research, from within the Human Relations Research Unit. The purpose of her research was to enhance the performance of commerce and industry using the techniques of social science. She did this by examining, in detail, the organisational structures of 100 British manufacturing companies in the SE Essex area (east of London and north of the Thames).

She stayed there until 1957, when she secured a post at the far more prestigious Imperial college. She remained there until her untimely death, from breast cancer, in 1971. Woodward became the second female professor at the College when she was appointed Professor of Industrial Sociology in 1970.

Woodward summarised her research in her 1970 book, ‘Industrial Organization: Theory and Practice‘.

Today, the idea that there is no ‘best’ organisational structure, but that the right one ‘depends’ on many factors is taken as so obvious as needing no explanation. This was not at all the case in the 1950s. So, when Woodward published her first findings in 1958, they seemed revolutionary.

Among the 100 manufacturers she studied, she found wide differences in the way they were organised:

She categorised three types of structure with approximately equal representation in her sample (8 were not classified).

Each had different structural characteristics, which we don’t need to examine here, because the technologies have changed a lot in the last 70 years. The principle remains relevant: that the systems your organisation creates are critical to successful organisational design. This is a different aspect to the idea of contingency, to the more familiar Situational Leadership models. It is also an idea (the need for structure to reconcile to systems) that finds its modern articulation in the McKinsey 7S model.

Woodward’s later work started to break down the control approaches that companies take. They identified two independent dimensions of control:

Personal-Impersonal
This ranges from the highly individualistic direct approach (often present in start-ups led by charismatic entrepreneurs) to bureaucratic styles of impersonal leadership, all the way to automated control of work that we now see in large, computerised warehouse operations.

Fragmented-Cohesive
At the fragmented end, every part of the organisation finds its own solutions (and ‘re-invents the wheel’ in 1990s jargon). We now see far more centrally controlled systems than Woodward did, facilitated by modern technology and mediated by business school teaching that this is more efficient. However, a select group of businesses are finding that this level of rigidity results in customer unfriendly outcomes that have led them to reject it and restore a measure of localism in their control systems.

So, was Joan Woodward ahead of her time? I don’t think so. I think she was exactly of her time. But this should not detract firstly, from the importance, at the time, of her work, and secondly, of the achievement of a woman, in the 1950s and 60s, who led her field.