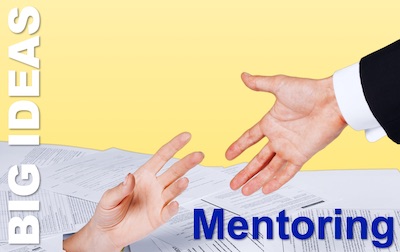 These days, mentoring is defined – more often than not – in distinction to coaching.

That’s easy to do, but if I were to do so, it would pre-suppose that you know what coaching is. And you may do. But, what if you don’t?

I have set myself the task of describing mentoring without mentioning coaching again in this article.

In Homer’s epic, the Odyssey, Mentor is a friend of Odysseus. When Odysseus leaves for the war with Troy, he leaves Mentor in charge of his son’s education and guidance. It is this character who gives his name to the role of mentor.

A mentor is a source of:

They can also act as a role model, and show belief in the mentee’s potential. What they don’t do is offer support outside of the mentoring relationship, as an advocate for their mentee. Mentees must stand on their own two feet. To cite the cliché, a mentor’s job is to teach the mentee to fish, rather than do the fishing for them.

The Mentoring Pocketbook, by  Bob Garvey & Geof Alred, is an excellent source of guidance for would-be mentors and organisers looking to set up mentoring schemes. Professor David Clutterbuck is one of the leading thinkers about modern mentoring. Also, he is perhaps its most prolific advocate. He endorses the book. On page 4, the authors quote the following definition of mentoring.

Mentoring is a learning relationship between two people. It requires a range of human qualities such as trust, commitment and emotional engagement. It includes a range of skills including listening, questioning, challenge and support. Mentoring has a time scale. In some contexts it is a life long relationship, in others it may be a few months.

In the world of business and organisational management, the authors of the Mentoring Pocketbook identify four types of mentoring:

Why Work with a Mentor?

I don’t want to assume that the benefits of having a wise counsellor are obvious. Indeed, it’s fair to say that not every mentor will necessarily live up to that soubriquet!

For the mentee, it can:

Why be a Mentor?

On the face of it, there’s less benefit in the relationship for the mentor. They must give up their time to share their wisdom for someone else’s benefit. But it should be a form of paying back a debt for the opportunities they had, and paying forward to the next generation.

But, most mentors find the practice deeply enriching. Not only is it a pleasure to give help and guidance, but we learn from the process. Mentors often find that the role helps them grow and develop too.

For the mentor, it can:

Who are Ideal People for Mentoring Roles?

Anyone who cares enough to take on the role can be a good mentor to the right person. And, while training is available (and a good idea), it’s more about the personal qualities that good mentors bring to their mentorship role. These include:

What are the Roles of a Mentor

In 2004, David Clutterbuck, an academic who studied mentoring relationships, coined an acronym for what mentors do: 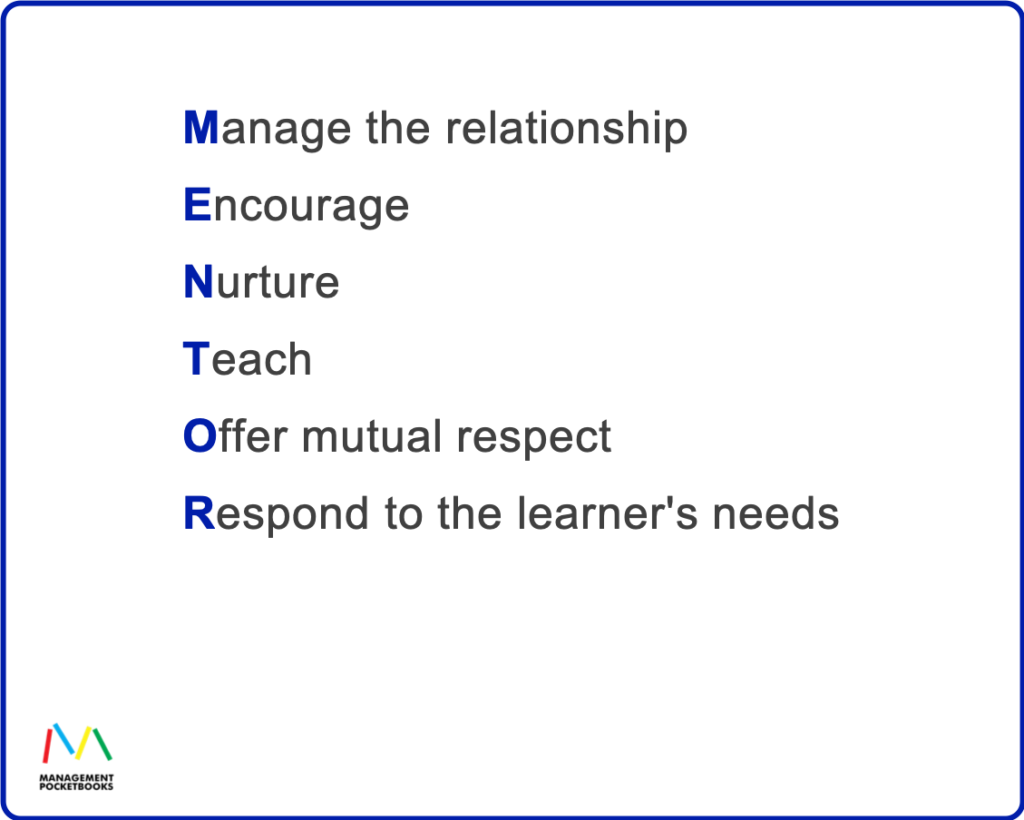 The Focus of a Mentor

The mentor’s focus is more often on the politics and the unwritten rules of the profession or organisation, than it is on the technical aspects of the mentee’s role. It is also on the pragmatics of getting things done, rather than on the mechanics.

I would also say that there is a big role for the mentor in demonstrating confidence in the mentee’s abilities and potential. I think that they have a part to play in reducing the interference element of Timothy Gallwey’s Performance Equation, which I shared in our article on the Inner Game:

But they also need to enhance the performance term. Mentors can do this by offering insights and challenges that stretch their mentee and lead them to think in new ways and see new possibilities.

What is Your Experience of Mentoring?

The Mentoring Pocketbook is full of tips, techniques, and tools to maximise the benefits of this highly effective human resource development process.

Except where explicitly noted, this article is based on my own understanding of mentoring. It may differ a little in emphasis from this excellent book, but it in no way differs in principle.