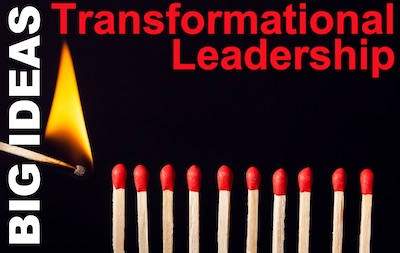 Can there be some big ideas that underpin the emergence of others? That’s a question that James McGregor Burns tackled in much of his writing. And the answer he gives us is ‘yes’. That big idea is Transformational Leadership.

It’s not surprising that leadership is a common topic for us, here at the Management Pocketblog. There must be a dozen different models to choose from among our articles. But Transformational Leadership is one we have returned to a number of times.

We do so, because it repays careful study. It is an idea that changed my thinking and has huge value for any manager or leader in business or public or community service.

The Origins of the Transformational Leadership Idea?

Mary Parker Follett (as is often the case) got there first. That’s why we described her as a ‘Management Visionary’. Edith Rusch spotted the similarities between James McGregor Burns’ ideas and Follett’s. In a paper called ‘The social construction of leadership: From theory to praxis’, Rusch offers a compelling argument both that:

But, sadly, Follett’s work is much neglected. She may have been a visionary, but she was, arguably, ahead of her time.

It was James McGregor Burns who brought Transformational Leadership to our conscious awareness. He did so in his book ‘Leadership’ (US|UK). For more about the context, see our article on Burns.

In that book, he set out a distinction between two forms of leadership:

But one person’s transformative change is another’s fascism. Burns was an assiduous documenter of historical transformations and the leaders who led them. His 2003 book, ‘Transforming Leadership’ (US|UK) offers a wealth of case studies, from Cleopatra to Mandela.

In 1978, Industrial Psychology academic Bernard Bass read and reviewed Burns’ ‘Leadership’. He liked it. A lot.

Bass put Burns’ ideas together with his own, and started the work on transformational leadership that would dominate his diverse academic reputation. Bass was a formidable thinker with a forensic academic approach. While Burns took a historical view and assessed the moral dimension of leadership, Bass was interested in a model for effective managerial leadership.

In 1985, he published his ideas in ‘Leadership and Performance Beyond Expectations’ (US|UK). He followed this with a string of further books on the topic of leadership. His book, ‘The Bass Handbook of Leadership: Theory, Research, and Managerial Applications’ (US|UK) is still one of the most valuable references on leadership.

It is the Bass model of Transformational Leadership that is most widely referenced today. You can read more about Bass in our article.

What is Transformational Leadership?

Transformational leaders influence through trust, charisma, and vision. Bass explored how they do that.

He took the view that they must do two things:

What Kind of Change?

Too many people misunderstand the distinction between transactional and transformational leadership as being about change:

But, the true difference lies in the type of change. Transactional change is incremental: transformational change is revolutionary and structural. It is driven by values, rather than by pragmatism. That said, while Burns had a moral vision of leadership and the transformations it can deliver, Bass took a morally neutral approach.

How to be a Transformational Leader

Bass developed a model of transformational leadership, with four roles:

Acting as a visionary, to make people feel like a part of something big and worthwhile. This role is concerned with purpose and meaning. It motivates people to participate in creating a fuure they desire.

Leaders need to celebrate diversity and build relationships. Each team member needs to feel connected to their leader and have a sense that their leader knows, respects, and is invested in them.

Transformational leaders invest their time and energy to help their followers to learn, grow and perform to their highest levels. They value intellect, and creative thinking, and are adept at seeing and harnessing different points of view.

This is the leader as a role model. They inspire personal respect, so that team members want to follow them because of their personal integrity. So, transformational leaders need to set and display high ethical standards. They must walk the talk, be honest, open, fair, and principled, and set strong values that they can demonstrate in their work.

What is Your experience of Transformational Leadership?