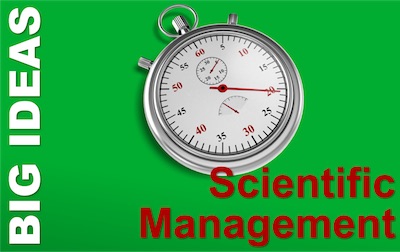 Scientific Management was the first real revolution in management thinking. And it owes much of its vigour and many of its flaws to its founder, Frederick Winslow Taylor.

In the closing years of the nineteenth century, Taylor was observing inefficiencies in the manufacturing plants of the United States. And he was finding patterns of disincentives, poor work practices, and waste. If only, he thought, the modern workplace could be revolutionised by the Scientific Method. And he was the man to set about it. In so-doing, he created the discipline of Scientific Management.

Why did we Need Scientific Management?

In one of the most important nineteenth century American steelworks, Midvale, a patrician Quaker went to work. He started at the bottom and quickly rose to become chief engineer.

As an engineer, he made many inventions that transformed steel manufacturing processes into more of a science. And he wondered if he could apply the same principles to the workers and their labour. It should be possible. After all, Edison was transforming lighting, Darwin had revolutionised biology, and Freud had even started to systematise our understanding of how people’s minds work.

Taylor saw the opportunity to make huge strides in efficiency based on scientific principles. Some of these, however, he intuited rather than tested. Principles like:

In a series of studies, Taylor was able to improve productivity substantially.

Taylor’s primary book on the subject has not been out of print since its first publication, in 1911: ‘The Principles of Scientific Management‘ (US|UK). Scientific management is sometimes known as ‘Taylorism’.

What is Scientific Management?

Scientific management is an approach to management that analyses the work and looks for optimum ways to carry it out. Its main objective is to increase efficiency, mainly through labour productivity.

‘the best management is a true science, resting upon clearly defined laws, rules, and principles.’

Two other quotes by Taylor are instructive:

‘In the past, the man has been first; in the future the machine must be first’

Here are the ones I’ve been able to find:

Perhaps Taylor’s single most important legacy is the production line. This was introduced by Henry Ford and is a response to two of Ford’s four principles of cost reduction (which are sometimes referred to as ‘Fordism‘):

Indeed, Taylor worked for Ford, doing Time and Motion studies at the Model T assembly plant. However, whilst ‘Taylorism’ has influenced the evolution of the production line and its techniques, what we can never know is the extent to which Taylor directly influenced Ford. Ford was a towering figure in his own right, and it seems likely from his story, that he arrived at many of the same conclusions as Taylor, independently.

Taylor and the Abuse of Henry Noll

Science and learning advances and retreats. We’ll see later that there are plenty of critiques of scientific management, stemming largely from a wealth of counter evidence. None of this should tarnish Taylor’s reputation. He made great strides and errors of understanding are entirely forgivable.

What is not forgivable is mistreatment of individuals, that in this case come close to racial abuse. I know we need to be careful about seeing past attitudes through a modern lens. But when we still see outright untruths told to favour an argument, and enliven a narrative, we must call it out. Rather than repeat a story that is better told else where, I urge you to take a look at the story of Taylor and Henry Noll, told briefly and clearly on the Explore PA History website (PA: Pennsylvania – home of Taylor, Noll, the Midvale Steel Works, and Bethlehem Steel).

How to do Scientific Management

Taylor set out four principles that should guide the way you set up operations. In simple terms, you should:

The Methods of Scientific Management have Evolved

A counter revolution to Scientific Management started with one of its great proponents, Elton Mayo. He set out to find evidence and instead discovered that people matter. And they matter more. He developed a theory of ‘Democratic Management’ which is now better known as the ‘Humanistic Approach’. You’ll see a list of significant figures from that tradition – before and after Mayo – below.

But elements of the scientific approach remain. And some of the primary elements can be seen as:

What is Wrong with Scientific Management?

Scientific Management assumes that there is a ‘right way’ to do everything. So it conflicts somewhat with experience and modern approaches such as Kaizen and Continuous Improvement initiatives, empowerment, performance coaching, and Corporate Kinetics. These promote autonomy and individual responsibility. They trust workers to find their own best solution. Taylor’s ideas also jar against modern ideas of team-working, freelancing, and work-life balance.

In our Management Thinkers series, we covered the work of over 200 great management thinkers and doers. Some were distinctly Taylorist in their thinking. Others took precisely the opposite view. And a third group straddled the divide in some way. Here are links to some of the most important of them.

I have highlighted the giant figures of the story of scientific management with italics and an asterisk*.

What do You Think about Scientific Management?

We’d love to hear your thoughts, ideas, and questions. Please leave them in the comments below.