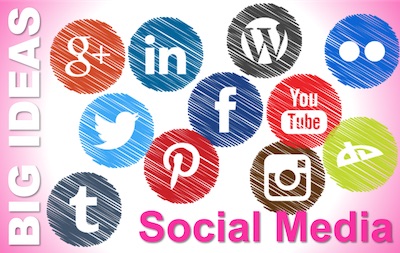 When I first thought about Social Media as a Big Idea, it seemed like a good topic. Until I started to think about it. Because forms of Social Media are ubiquitous – we all use them, so what can I tell you that you don’t already know?

Well, take a look, and find out.

What is Social Media?

We can do worse than start with the words ‘social’ and ‘media’.

But crafting a definition is tricky. Heidi Cohen asked over 60 social media commentators and practitioners, and documented their answers on her website.

Some of those answers are witty, wise, and insightful. Some are clever, some are pithy, and some are dead straight. I had a swing at a straightforward definition of my own

Social media are websites and applications that let us create and share content, build communities, or participate in social interaction.

As with most ‘know it when you see it’ things, there is a common set of features from which all examples draw. The core social media have most of these features. The fewer that an application or website has, the less we are inclined to recognise it as a social medium.

Social Networking is Not New

But social media also allow other activities that are not social networking. This makes for the curious relationship that:

Why Use Social Media?

I could ask ‘why do we have social media?’ But that would be fatuous. We have the technology and humans are a social species. It was inevitable that we’d use the technology for social purposes. Indeed, the whole ‘purpose’ of the internet was for communication.

But, instead, I want to ask why you, as a manager, should use Social Media. Or, more precisely, what for. Because it is, without doubt, one of the most powerful and flexible tools that humanity has created. Let’s list some of the things a professional or an organisation can use it for.

How to Use Social Media

Everyone’s an expert. And a lot of ‘experts’ are not. Indeed, you should view anyone promising to sell you the secret to effective marketing on social media with suspicion. Many are selling snake oil. But some have good advice.

I’m not an expert. So, I’ve done some research for you. I went looking for good advice on using corporate social media accounts well. Not for spammy sales, but for good reputation-building. As it is often the case that ‘those who know, don’t say, and those who say, don’t know’, it’s been hard to find a set of valuable guidelines that are:

I think I finally hit gold. A university that has published its best practices for using social media: Tufts. Take a look at Tufts Best Practices here.

The Dark Side of Social Media

I don’t want to discuss this, but we do need to acknowledge that it exists, and represents a huge challenge for society. And it’s a challenge that I suspect will grow and evolve over many years to come.

What is Your Experience of and Opinions about Social Media?